People, especially those with low, middle and fixed incomes, are suffering a lot as prices of essential commodities continued to soar across the country, including the capital, ahead of Ramadan.

Apart from the daily essentials, the demand for certain commodities like brinjal, sugar, meat and different kinds of vegetables has gone up ahead of the fasting month.

Taking the opportunity, some unscrupulous traders have hiked the prices of most of the essentials.

Lack of market monitoring and surveillance by the government against the wholesale market manipulators is also responsible for the price hike, experts said.

Most of the vegetables were selling at Tk 50 per kg on average which was Tk 20-30 a week ago.

Prices of chicken, beef and mutton have also gone up in the capital.

Ghulam Rahman, chairman of Consumer Association of Bangladesh (CAB), said some greedy businessmen have been manipulating the prices of most essential commodities for lack of surveillance in the market when there is a high demand for those items.

He said buying in bulk needlessly ahead of Ramadan increases the demand and prices of commodities. “So, consumers have also a role in keeping the prices at a tolerable level,” he said, adding that low-and-fixed-income people are facing further hardship due to the price spiral.

Venting his anger, Abdul Matin, a private service holder, said the government is doing little although the prices of all the essential commodities continued to rise.

He said he bought a broiler chicken from Malibagh Kitchen Market at Tk 165 per kg which was Tk 120 only a month ago.

Matin demanded that the government increase its surveillance to arrest the spiraling commodity prices.

The price of local ginger has increased by 17.65 per cent while that of imported one by 10.53 per cent in a week. They are now selling at Tk 80-120 and Tk 70-140 per kg respectively, according to Trading Corporation of Bangladesh (TCB).

Saiful Islam, a vegetable trader at the market, said the prices of vegetables have started to increase following a fall in supply with the departure of winter.

He also said the vegetable prices will see a further hike. 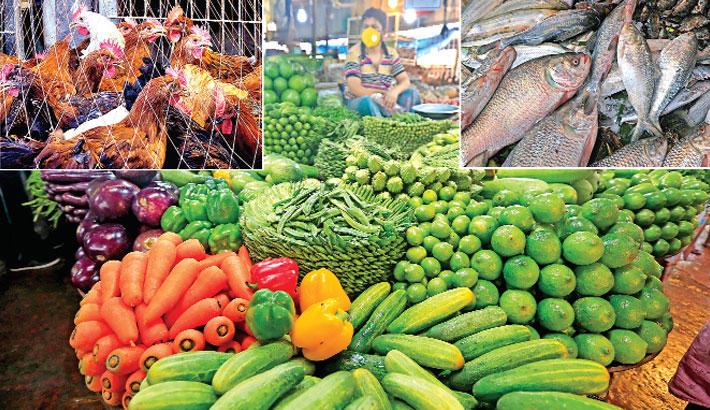