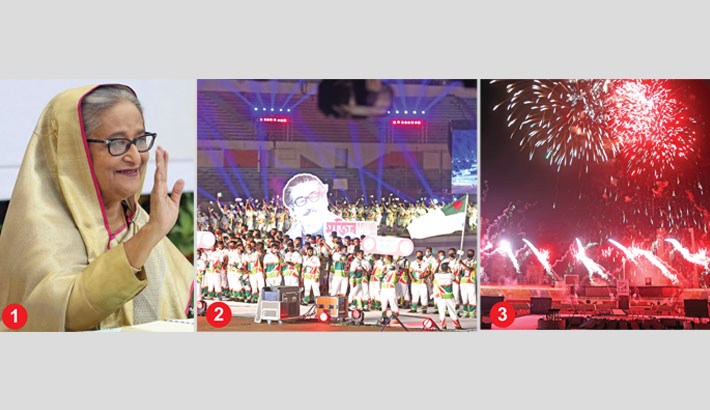 The curtain of the country's biggest multi-sports event Bangabandhu Bangladesh Games, named after Father of the Nation Bangabandhu Sheikh Mujibur Rahman, rose with a colourful inaugural ceremony at the Bangabandhu National Stadium on Thursday.

Prime Minister Sheikh Hasina, the chief patron of the Games, inaugurated the meet virtually. During her speech, she advised all to strictly follow the health measures during the Games.

Hasina also thanked the organisers for holding the games to commemorate the 50th anniversary of the country and the birth centenary of Bangabandhu Sheikh Mujibur Rahman.

“My father loved sports, my brothers were players. The players are the ambassadors of the country in the international arena. I thank the organisers for hosting the games commemorating two big occasions,” said Hasina.

“However, I also hope the athletes and all the concerned remain aware and take preventive measures against Covid-19. I believe this kind of effort helps the athletes to look forward to enhancing the image of the country, I wish all the best for the success of the Games,” Hasina added.

The progress of Bangladesh sports and the future vision to upgrade it under the competent leadership of Sheikh Hasina was presented through the audiovisual presentation before the athletes entered the venue waving miniature flags.

Aziz thanked the Prime Minister, ministers, sponsors and others involved with the Games for helping them to arrange the meet.

“We are fortunate to have such a sports-loving Prime Minister, she is the inspiration of sports in the country, under the hectic schedule of state-related work she never misses the sports events, we are trying hard to develop our sports arena locally and internationally and the support of the Prime Minister is always there,” said Russell.

The mascot of the games ‘Kapot’ a flamboyant pigeon then exchanged greetings with the athletes transmitting the message of peace, harmony and equity.

The cultural part of the program highlighted the contribution of Bangabandhu to independence.

Renowned Bangladeshi singers - Rezwana Choudhury Bannya and Sabina Yasmin alongside other musicians performed on the stage during the opening ceremony.

The opening ceremony was concluded with vibrant fireworks and a laser show amid huge applause of the athletes and the surrounding areas.

A total of 5300 athletes are competing for 1271 medals in the 378 events of 31 disciplines. The events of the Games will take place at 29 venues of seven divisions.

The ninth edition of the Games is taking place after a gap of eight years. It was earlier scheduled to be held last year but BOA postponed it due to the Covid-19 outbreak last March.