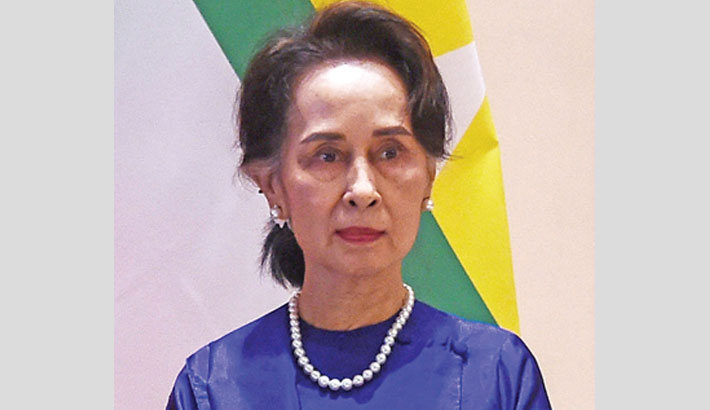 YANGON: Myanmar’s deposed leader, Aung San Suu Kyi, has been charged with breaking a colonial-era official secrets law, her lawyer said on Thursday, the most serious charge against the veteran opponent of military rule, reports Reuters.

Myanmar has been rocked by protests since the army overthrew Suu Kyi’s elected government on Feb. 1 citing unsubstantiated claims of fraud in a November election that her party swept.

Suu Kyi and other members of her National League for Democracy (NLD) have been detained.

The junta had earlier accused her of several minor offences including illegally importing six handheld radios and breaching coronavirus protocols.

Her chief lawyer, Khin Maung Zaw, told Reuters by telephone that Suu Kyi, three of her deposed cabinet ministers and a detained Australian economic adviser, Sean Turnell, were charged a week ago in a Yangon court under the official secrets law, adding he learned of the new charge two days ago.

A conviction under the law can carry a prison sentence of up to 14 years.

A spokesman for the junta did not answer telephone calls seeking comment.

Suu Kyi, who is 75 and won the Nobel Peace Prize in 1991 for her efforts to bring democracy to Myanmar, appeared via video link for a hearing in connection with the earlier charges on Thursday. Another of her lawyers, Min Min Soe, said she appeared to be in good health.

“Amay Su and President U Win Myint are in good health,” the lawyer said, referring to Suu Kyi by an affectionate term for mother. The president, a Suu Kyi ally, was also deposed and detained in the coup. He too faces various charges.

Their lawyers have said the charges against both of them were trumped up.

At least 538 civilians have been killed in protests against the coup, 141 of them on Saturday, the bloodiest day of the unrest, according to the Assistance Association for Political Prisoners (AAPP) activist group.

Protesters were back out in several places on Thursday and two more people were killed, according to media reports, as activists burned copies of a military-framed constitution and called for unity among all those opposed to army rule.

One person was killed and five wounded when the security forces fired in the central town of Monywa, the Monywa Gazette reported.

Police and a spokesman for the military did not answer calls seeking comment.

At least 20 soldiers were killed and four military trucks destroyed in clashes with the Kachin Independence Army (KIA), one of Myanmar’s most powerful rebel groups, DVB news reported.

Reuters could not immediately verify the reports and a junta spokesman did not answers calls seeking comment on the clash.

Myanmar military aircraft have started bombing positions of another group, the Karen National Union (KNU), for the first time in more than 20 years and thousands of villagers have fled from their homes, many into Thailand.