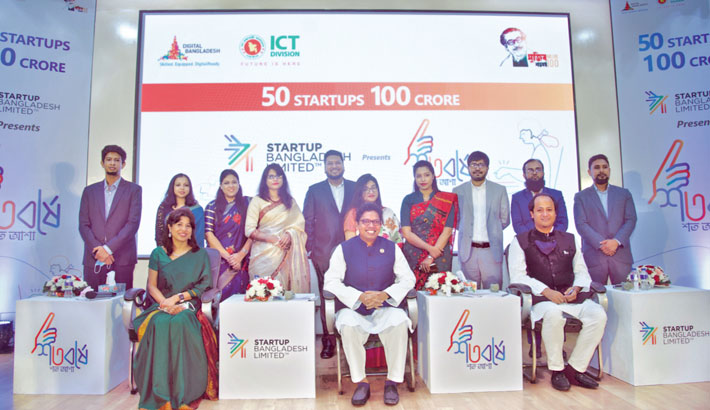 Startup Bangladesh Ltd, the government’s venture capital fund, made the announcement on Wednesday while launching the Tk 1 billion investment project.

Under the title “Shotoborshe Shoto Asha”, the government will invest Tk 1 billion in 50 startup firms in 2021.

In its first series of investment, the seven companies received Tk 150 million, said a press release.

Startup Bangladesh Ltd is the flagship venture capital fund of the ICT ministry.

“The government has invested in the startups acquiring a portion of the share. We never want to dominate over the board of governance at these companies,” State Minister for ICT Zunaid Ahmed Palak.

He was addressing a meeting as chief guest at the ICT Tower in Dhaka on Wednesday.

Under the specialised campaign of “ShotoBorshe Shoto Asha”, the government will invest Tk 1 billion in 50 startups in 2021 marking the birth centenary of Bangabandhu Sheikh Mujibur Rahman and golden jubilee of country’s independence.

Deputy Minister for Education Mohibul Hasan Chowdhury joined the event as the guest of honour, with Startup Bangladesh Managing Director Tina F Jabeen in the chair.

In reply to a question, Palak said the guided investment fund would provide investment in equity, convertible debt, and grants in pre-seed, seed, and growth-stage startups.

“For scaling up idea or early stage business prototype, the government has been running different programmes like Bangabandhu Innovation Grant and Student to Startup. Under these initiatives, any innovator can raise maximum Tk 1 million for developing a startup from an idea,” he said.

For the next phase of the series investment, the selection board will consider recommendations from 42 startup circles in the country, according to the state minister.

After signing separate agreements with the startup companies, State Minister for ICT formally handed over the cheque to officials of Sheba.xyz and

Chaldal.com, while the remaining five will get the fund gradually.

According to Mohibul Hasan Chowdhury, the tech-enabled business models help the country attain growth in different segments including financial inclusion.

He also urged the authorities of the Startup Bangladesh to support the students and young innovators to scale up the idea or prototypes of the business.

However, the state minister denied to mention the allocation figures for each startup. “As per the directive of honourable ICT Advisor, the equity shares of the government in the startups will not be more than 49 percent. We want to provide convenient space for doing business,” he said.

“We remain focused on financial inclusion, social equity, and equal access to technology,” she added.

The government formed Startup Bangladesh in March 2020 with an allocated capital of Tk 500 crore to help new entrepreneurs in innovation, job creation, development of technical skills and realizing the vision of Digital Bangladesh.