WHO chief calls for deeper probe into lab-leak theory 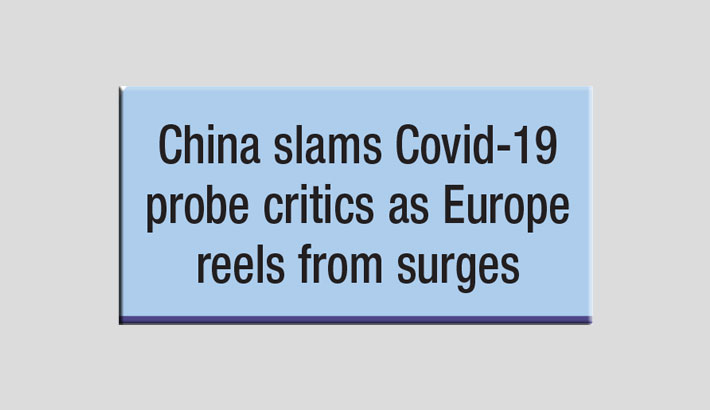 BEIJING/GENEVA: China on Wednesday slammed “unethical” critics as it faced mounting pressure over origins of the Covid-19 pandemic, after the World Health Organization chief Tedros Adhanom Ghebreyesus urged a deeper investigation into whether the coronavirus outbreak originated with a leak from a lab, reports AFP.

WHO-backed experts had judged it “extremely unlikely” that the virus was leaked from a Chinese lab after a politically sensitive mission to the ground-zero city of Wuhan, but the UN body’s boss stressed on Tuesday that “all hypotheses are open” and “warrant complete and further studies”.

The United States also led a chorus of concern over the findings, with China riled by swirling accusations that it failed to give proper access and data to the investigators.

“This practice of politicising the search for the origins of the virus is extremely unethical,” Chinese foreign ministry spokeswoman Hua Chunying said at a press briefing, stressing that full access was granted to the Wuhan lab.

China was not mentioned directly by WHO chief Tedros Adhanom Ghebreyesus or in the statement by the United States and its 13 allies, but Beijing hit back, saying it had demonstrated “its openness, transparency and responsible attitude”.

The WHO team “expressed the difficulties they encountered in accessing raw data”, Tedros said ion Tuesday.

China was slammed last year by former US president Donald Trump, who had promoted the theory that the virus could have leaked from the Wuhan Institute of Virology and accused Beijing of not being transparent about the initial outbreak.

Beijing has rejected the allegations.

As governments bicker and point fingers over its origins, the virus has spiked again in many parts of the world, including Europe, where French President Emmanuel Macron will address the nation to respond to criticism that he has let Covid-19 run out of control.

The known global Covid-19 death toll has exceeded 2.8 million, and the virus has gained fresh, devastating momentum in many countries.

Daily new cases have doubled to around 40,000 in France, and hospitals in infection hotspots such as Paris have been overwhelmed, building pressure on Macron to respond.

His prime-time television address on Wednesday will follow a weekly meeting of top ministers, with several anti-virus options reportedly under consideration including a much-resisted national lockdown. There are similar surges elsewhere in Europe, forcing governments to reimpose unpopular restrictions.

Italy on Tuesday said it would impose a five-day quarantine on travellers arriving from other EU countries, while Germany will beef up checks along land borders to ensure people arriving have negative Covid-19 tests.

Germany is scrambling to contain a third wave of cases, with a debate raging nationwide on how to control the surge while minimising the economic and social impact of restrictions.

Authorities in Tuebingen near Stuttgart are trying to keep the historic university city open by offering free coronavirus tests—anyone with a negative result can enjoy a day of shopping, culture or outdoor dining.

“I think it’s long overdue that people consider strategies other than just closing everything,” said Kathrin, 33, who was visiting a shop in the city.

While countries race to try and speed up vaccine rollouts, seen as crucial to defeating Covid-19, many are battling supply scarcity and logistical challenges.

Australian Prime Minister Scott Morrison admitted Wednesday that the country will fall well short of its initial target of jabbing four million people by the end of March, as concerns grew over the glacial pace of vaccinations in the country.

In addition to the economic devastation, the pandemic has also rolled back years of progress towards gender equality, according to a report released Wednesday.

Studies have shown that the Covid-19 pandemic has had a disproportionate impact on women, who have lost jobs at a higher rate than men, and had to take on much more of the extra childcare burden when schools closed, according to the World Economic Forum’s annual Global Gender Gap Report.

The pandemic’s impact on the world of entertainment was also brought into focus Tuesday as it emerged that next month’s Oscars ceremony will include venues in Britain and France for international nominees unable to travel to the United States.