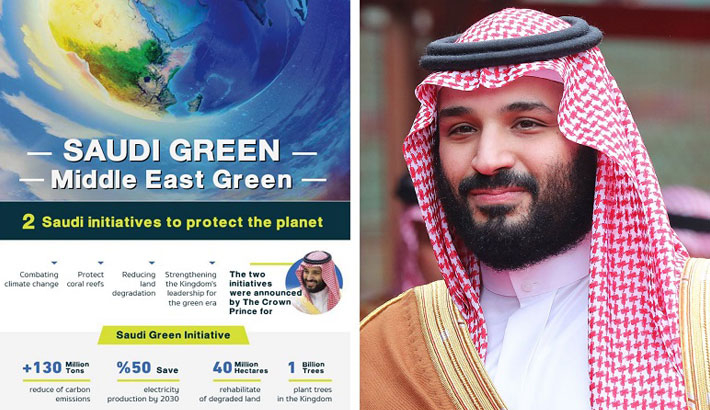 The Kingdom of Saudi Arabia has launched two landmark initiatives to protect the planet by combating climate change, reducing land degradation and strengthening the Kingdom’s leadership for a green era.

The afforestation project will be double the size of the Great Green Wall in the Sahel region, the second-biggest regional project of this kind.

The Saudi Crown Prince has called the leaders of Qatar, Iran, Sudan, Kuwait and Bahrain to talk about the tree planting project.

During the call, they discussed the Saudi Green Initiative and the Middle East Green Initiative, which call for partnerships with regional countries to face the environmental challenges in the region, improve the quality of life and implement the largest afforestation project in the world that will contribute to restoring millions of hectares of degraded land in addition to reducing global carbon levels.

Secretary General of the Gulf Cooperation Council (GCC) Dr Nayef Falah Mubarak Al-Hajraf praised the two initiatives announced by the Saudi Crown Prince, deputy prime minister and minister of defence, stressing that they will chart the direction of the Kingdom and the region in protecting the nature and facing environmental challenges.

He affirmed that these initiatives will contribute significantly to preserving vegetation cover, reducing carbon emissions, combating pollution and land degradation, and preserving marine life, through a number of steps such as planting 10 billion trees within Saudi Arabia during the coming decades.

While launching the two projects, Mohammed bin Salman said: “As a leading global oil producer, we’re fully aware of our responsibility in advancing the fight against the climate crisis, and that just as we played a leading role in stabilising energy markets during the oil and gas era, we’ll work to lead the coming green era.”

As economic and social development may be at the forefront of the agenda in Saudi Arabia, the Kingdom has been committed to applying new environmental policies, including the preservation of marine and desert habitats and greenifying its urban areas, he said.

“The Kingdom of Saudi Arabia will work with these countries to transfer knowledge and share experiences which will contribute to reducing carbon emissions by more than 60 percent,” the Crown Prince added.

He hoped that the joint efforts will achieve a reduction of more than 10 per cent of global contributions.

The two initiatives come in support of the existing environmental efforts the Kingdom has supported in previous years as it continues to face its own challenges at home from desertification, low rainfall and debilitating dust storms.

Mohammed bin Salman stretched the initiatives stem from the Kingdom’s leading role towards common international issues, and as a continuation of its efforts to protect the planet during its 2020 G20 presidency, which resulted in a special declaration on the environment, the adoption of the concept of a circular carbon economy, and the launch of two initiatives to reduce land degradation and protect coral reefs. “This is just the beginning. The Kingdom, the region, and the world at large need to move forward at an accelerated pace in the fight against climate change.”

He also gave an intimation that details of the Saudi Arabia Green Initiative will be announced in the coming months, and work will commence towards launching a regional gathering in the presence of the international partners of the Middle East Green Initiative in the second quarter of 2022.

The Kingdom of Saudi Arabia recognises the importance of protecting the environment, combating climate change and facing environmental challenges in the region, which have clearly shown in high temperatures, low rainfall, high dust waves and desertification; creating an economic threat to the region.

“Today, we announce “The Saudi Green Initiative” and “The Middle East Green Initiative”, the two initiatives that are to be launched soon, aim to chart a path for the Kingdom of Saudi Arabia and the region in protecting the planet, by clearly defining a road map that rallies the region and significantly contributes to achieving global targets in confronting climate change,” the Crown Prince said.

What is Saudi Green Initiative?

This is a national initiative for the Kingdom of Saudi Arabia, aiming to improve the quality of life and protecting future generations. It includes several goals namely: (increasing the level of vegetation cover, reducing carbon emissions, combating pollution and land degradation, and preserving marine life).

• The initiative will entail a number of initiatives, most notably:

- The planting of 10 billion trees within the Kingdom of Saudi Arabia.

- Reducing carbon emissions by more than 4pc of global contributions.

- Launching a renewable energy programme that will increase the share of energy from renewables from 0.3pc to 50pc by 2030.

What is Middle East Green Initiative?

This is an initiative for the region that aims to coordinate efforts and keep abreast with regional and international developments, which the Kingdom launches as a roadmap for the region; contributing significantly to achieving the global targets to confront climate change, through various initiatives, such as:

- Enhancing the efficiency of hydrocarbon technologies in the region.

- Launching the largest reforestation plan in the world, which aims to plant 50 billion trees in the Middle East region, representing 5pc of the global target for planting one trillion trees, and achieving a reduction of 2.5pc of global carbon rates.

These joint efforts will contribute to achieving a reduction in carbon emissions by more than 10pc of the global contributions.

In partnership with sister countries in the Cooperation Council for the Arab Gulf States and Middle Eastern countries, and in cooperation with all international allies we aim to work jointly on achieving the goals of the Middle East Green Initiative.

The Kingdom of Saudi Arabia will hold an annual summit titled "The Middle East Green Initiative" which will convene leaders of government, ministers and officials in the environmental field to discuss and outline the details of the initiatives and the mechanism for their implementation.

There is an aim to start execution of the initiatives from the fourth quarter of this year, and across the upcoming two decades. Separately, the Kingdom will establish a non-profit organisation to hold the summit, support and monitor achieving the goals of the initiatives.

The Kingdom fully recognises the challenges facing the region from the scarcity of water, financial and technical resources to geographic terrain. Therefore, the Kingdom will work in partnership with the countries of the region to research innovative mechanisms to finance these initiatives for recourse-deprived countries, all will share technologies and expertise among countries to support reducing carbon emissions resulting from oil production in the region. They will jointly develop innovative methods to irrigate from treated water, cloud seeding and other resources, and propose other solutions such as: planting trees suitable for the region (native trees) that require irrigation for three years only, and then may grow with natural irrigation in due course. The Middle East Green Initiative Summit will address any challenges that may arise and will work to develop solutions to address them.

The Kingdom’s achievements in the last four years:

- Completed a comprehensive restructuring of the environment sector.

- Established The Environmental Special Forces in 2019.

- Raised the percentage of natural reserves from 4pc to more than 14pc.

- Achieved the most efficient levels of carbon emissions of hydrocarbon producing countries.

- Launched one of the world’s largest green hydrogen production projects in NEOM, with an estimated cost of US$5 billion with a capacity of roughly 650 tonnes per day.

- Desertification and air pollution pose significant and immediate climate and economic challenges for Saudi Arabia and the Middle East. Billions of dollars are lost every year due to sand storms, and air pollution from Green House Gas emissions is estimated to have shortened life expectancy in Saudi Arabia by 1.5 years.

- Sandstorms have increased since the nineteenth century by 25pc in the world.

- It is estimated that coral reefs are threatened with extinction by 2050.

- The share of clean energy production in the Middle East today does not exceed 7pc.