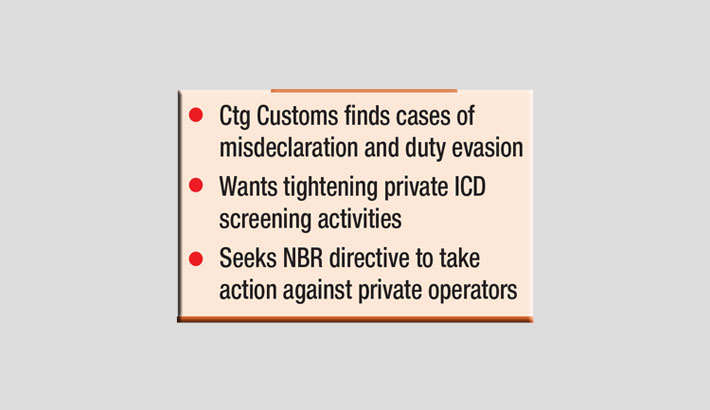 Exports and imports through misdeclaration and duty evasion are often taking place at private Inland Container Depot (ICD), widely known as off-dock, due to lack of scanning machines.

As the private ICD operators have not installed scanning machines at the off-dock, Chittagong Custom House has found that a growing number of cases of misdeclaration and duty evasion are being detected there.

Chittagong Custom House authority recently found that private off-dock operators have not installed scanner machines yet though it is mandatory to set up all the checking machines, including scanning machines, at the off-dock in line with the Private ICD/CFS Policy-2016.

In a letter to National Board of Revenue (NBR), Custom House authority said that it is mandatory to set up scanner machine for checking import and export containers while getting off-dock licence and renewing its licence in line with the Private ICD/CFS Policy-2016.

Though it is mandatory to have scanner machine at the off-dock for operating private inland containers, the operators are operating ICD without this important technology.

Following the fact, the authorities have recently found several cases of misdeclaration and duty dodging incidents while operating private containers for export and import.

In most cases, they found cases like import of goods and products through misdeclaration and exporting less than the declaration, Chittagong Customs House mentioned in a letter expressing concern.

Taking the matter into cognizance, the Chittagong Customs House has sought directives from the National Board of Revenue over taking actions against the private ICD operators for violating the rules.

Currently, a total of 17 off docks are functioning outside the Chittagong Port to handle imported and exported containers and ease congestion at the country’s prime seaport.

These private ICDs, CFSs require obtaining permission from the National Board of Revenue, Ministry of Shipping, Chittagong Port Authority, Department of Environment and other relevant government agencies.

The customs allows a total of 37 items for handling at the off-dock.