‘We are suffocating’: Migrants appeal for help 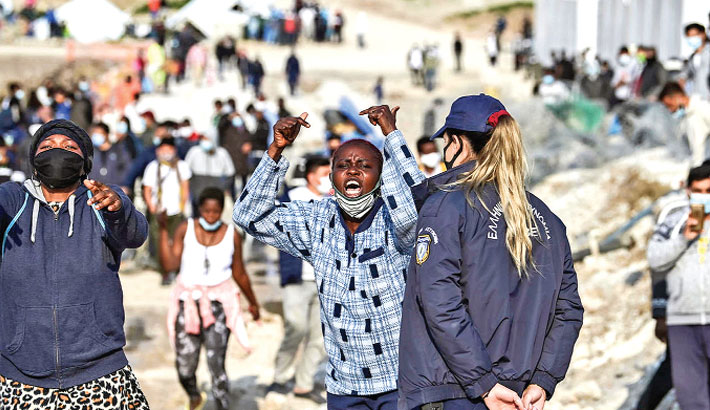 On a windswept hill overlooking the Aegean Sea, thousands of asylum seekers huddling in tents on the island of Lesbos are glad to see the end of winter.

“The nights are very, very cold, and it’s very difficult with a five-month baby,” Abdelkhader Ali, a 25-year-old Syrian, tells AFP inside the camp of Mavrovouni. Designed to be temporary after a fire destroyed the island’s previous permanent facility of Moria, Mavrovouni has been home to over 6,000 people since September. On a rare media tour organised during a visit to the island on Monday by EU home affairs commissioner Ylva Johansson, asylum seekers shout out to reporters that they are tired of incarceration. “It’s a prison, we cannot do anything,” says Jawad, a 34-year-old Afghan who had hoped to speak to Johansson. “Free us. You must free us,” chant a dozen women from Mali and the Democratic Republic of Congo near a camp gate, under the watchful eye of Greek police. “We want to go to school, we want to build a family,” says one of the women who has been on the island since 2019 and has seen no progress in her asylum claim. “We are suffocating here,” she yells as police escort the journalists out of the camp and shut the gate. The European Union has allocated 276 million euros ($325 million) for the construction of new camps on Lesbos and four other Aegean islands—Chios, Samos, Kos and Leros—where nearly 14,000 migrants are hosted. “It’s of the utmost importance that we don’t leave people in tents for another winter,” Johansson said Monday at a news conference with Greek Migration Minister Notis Mitarachi. Work on a new permanent Lesbos camp is expected to start in the summer, Mitarachi said, without giving a completion date. “We will not allow for a difficult winter ahead,” the minister vowed. He said Greek authorities had overcome a “big challenge” in housing asylum seekers left homeless overnight by the burning of Moria, who at the time numbered over 10,000. “Most of the work for flood prevention has been almost completed. Now electricity is coming in, hot water is there,” Mitarachi said. He insisted that the temporary camp, a former army target range, is “much more decent, clean and safe than Moria ever was”. “There is a check when people come in, you cannot bring knives into the camp, you cannot bring alcohol,” Mitarachi said. Camp residents acknowledge that security has improved with some 300 Greek police now present, but a host of other problems remain. “The only thing that is good here in this new camp is the security,” says Raed Alobeed, 45, also from Syria. “In the old Moria camp... the violence (came in) high levels. We got victims, we got stabbing people, thieves, mafia, selling drugs.” Bakari, a young migrant from Mali, says he hasn’t washed in three days for lack of hot water, contradicting the minister. “We live like pigs,” adds Jojo, a Congolese asylum seeker who stresses that the police only intervene to break up fights. Compounding the sense of imprisonment, the migrants are only allowed to travel to the nearest town for groceries a couple of times per week, because of coronavirus concerns. “We make do with what they give us, two meals a day,” says Jacques, another Congolese migrant.