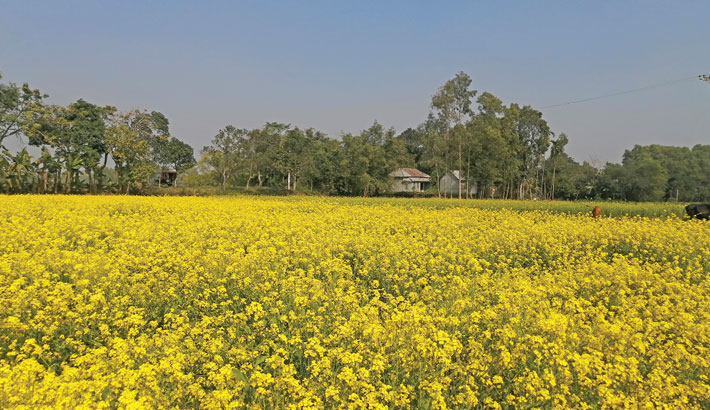 Mustard farming has become more profitable than many other crops as farmers can produce the oilseed with less care and at low production cost.

The skyrocketing price of edible oil has also increased the demand for mustard in recent time and gave extra profit to farmers due to a hike in price.

“Simple cultivation process and lower production cost compared to other Robi crops is the reason behind the popularity of mustard farming,” said Md. Khairul Alam, project director of Production, Storage & Distribution of Quality Seeds of Pulses, Oils & Spices at Farmers level Project-3rd Phase of the Department of Agriculture Extension (DAE).

He said newly developed mustard varieties are helping to increase the production of the oilseed.

Massive production boost of mustard oil may substitute the country’s edible oil imports and save a huge amount of foreign currency, he said.

Mustard takes 80 to 85 days to get the yield while October to mid-November is the suitable time for cultivation.

“Higher price of soybean oil forced people to buy mustard oil, causing a hike in the price of the oilseed this year,” said Saiful Islam, a mustard cultivator in Kushtia.

The country has an annual demand for 51.27 lakh tons of edible oils including soybean, mustard and other varieties, according to the Ministry of Agriculture.

The majority of it 46.21 lakh tonnes come from imports which costs the country’s $3.20 billion approximately.