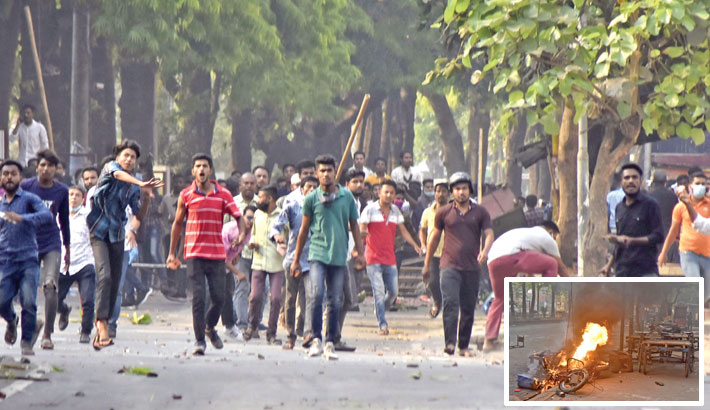 BNP activists hurl brickbats at police during a protest rally in front of the party office at Nasiman Bhaban in Chattogram as part of their countrywide programme on Monday. Inset, a motorcycle set on fire during the clash with police. —SUN photo

CHATTOGRAM: Two cases were filed on Tuesday accusing over 100 leaders and activists of Bangladesh Nationalist Party (BNP) over a clash with police.

Police filed the cases accusing 57 identified and 50 to 60 unidentified ones at Kotwali Police Station.

A total of 16 leaders and activists including Chattogram city unit convener Dr Shahadat Hossain were arrested so far.

Officer-in-charge (OC) of Kotwali Police Station Md Nezam Uddin said they took the arrestees before a court and asked permission to interrogate them in custody for seven days. They are hunting for the rest of the accused, he said.

On Monday, BNP city unit organised a protest rally in front of the party office as part of their nationwide programme.

Some BNP men allegedly hurled brickbats at police from a procession resulting in a clash. The clash left a number of people including six policemen injured.

Later, police baton-charged the crowd to disperse them and brought the situation under control.

The BNP leader came up with the statement while addressing a press conference at the party central office in Nayapaltan of the capital.