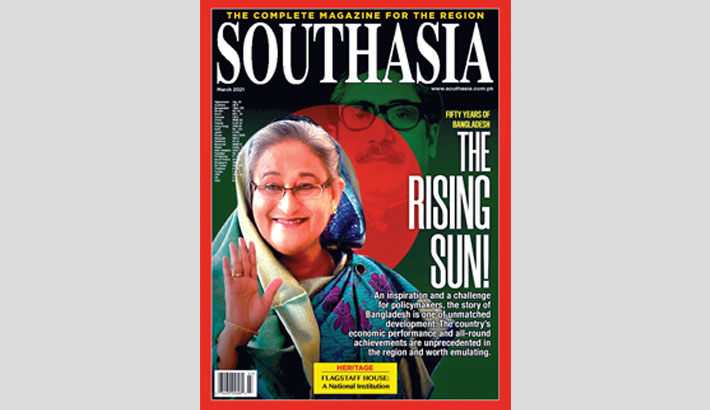 Pakistani magazine SOUTHASIA has published a total of seven stories highlighting the success and achievements of Bangladesh and Prime Minister Sheikh Hasina.

In its March issue, the magazine published the stories with a photograph of Sheikh Hasina on the cover on the occasion of the golden jubilee of Bangladesh’s independence, highlighting her government’s success in achieving socioeconomic progress and tackling the coronavirus pandemic.

In those stories, it was stated that Covid-19, global economic crisis and effects of climate change have left their mark across the world, including South Asia, of which Bangladesh is an integral part.

In 2019, the Bangladesh economy was the fastest growing in the region, with a record growth of over 8.9 per cent, according to the United Nations.

Yet, since the start of the pandemic, Bangladesh has been severely affected by a slump in demand for its exports – particularly clothes manufactured by its garment sector – and by a drop in the value of remittances sent home by Bangladeshis working abroad.

Despite these difficulties, several reasons can be perceived for cautious optimism, especially if Bangladesh can cooperate with other nations in addressing common problems.

One reason to be hopeful is that Bangladesh has not been as badly affected by the pandemic as some other countries, despite crowded living conditions and limited sanitation. By mid February 2021, the total number of deaths in the country was just over 8,000. However by that stage, the daily death toll from the disease had fallen to its lowest level since May 2020.

A vaccine programme is now underway and more than half a million people have already been inoculated against Covid-19.

This is an impressive achievement, especially given that many countries in the world have not yet started vaccinations.

There are ample supplies of Oxford-AstraZeneca vaccine still to be distributed, thanks to the support of the Indian government. The vaccine, known as Covishield in India, is being mass produced by the Serum Institute of India.

At the end of last year, there were some arguments about how much vaccine should be exported from India to Bangladesh but fortunately these disagreements appear to have been resolved satisfactorily.

The two nations are running vaccination programmes simultaneously – a sensible approach given that the virus has no perception of national boundaries.

The second story titled “Life Begins at 50” quoted seven eminent citizens as to why Bangladesh has won the race.

The third story, “Pleasant Surprise!”, mentioned that the journey of Bangladesh is heroic and laudable. It also discussed the challenges and way-out.

The fourth story titled “Taking Stock” begins with a question as to whether Bangladesh can make progress in the post-pandemic period. It pointed out RMG and other potential sectors of Bangladesh which are invincible. It is written by Dr Farida Khan, Professor of Economics of Colorado University.

In the fifth story, “Malice Towards None?”, it was said that Bangladesh is going ahead maintaining good bilateral relations with all countries.

The seventh story titled “Economic Solutions” says Bangladesh has sustained a higher growth rate which enabled it to progress at the fast pace.

The link of the issue of the magazine is http://www.southasia.com.pk/category/cover-story/