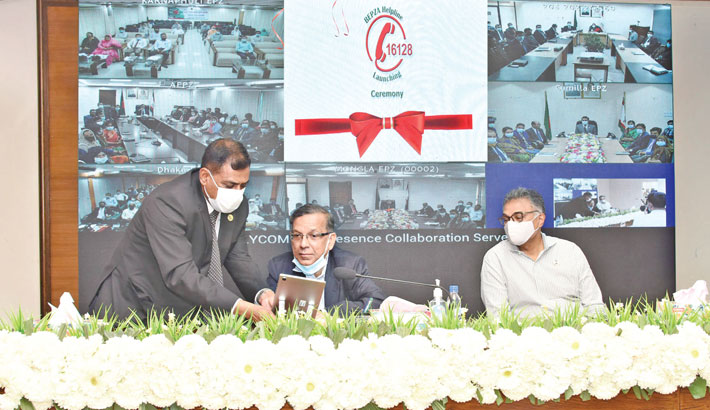 "It reflects through Workers-Owners-Management synergy prevailing in the EPZs," he said at the launching ceremony of BEPZA Helpline for the EPZs workers at BEPZA Complex on Sunday.

Anisul Huq inaugurated the BEPZA helpline through a phone call connected with EPZs as the chief guest while Prime Minister Principal Secretary Dr Ahmad Kaikaus, was present as the special guest.

Anisul Huq said that Bangladesh has achieved a tremendous success in economic growth during the last decade under the leadership of the Prime Minister Sheikh Hasina.

"Bangladesh has become an attractive destination for investment in Asia as well as global arena due to its’ geo-regional location, the most inexpensive and easily trainable workforce and moderate production cost," he added.

BEPZA has achieved $5,516 million investment and exported goods worth of $84,781 million since its inception.

Some 423 thousand Bangladeshi nationals are working in different enterprises of EPZs under BEPZA.

Dr Ahmad Kaikaus said that BEPZA is a unique organisation to uphold the rights of the workers.

"Other industrial units and organisations will be inspired to take such initiatives for the welfare of the workers," he added.

Dhaka EPZ transformed this area into an industrial belt, said Dr Ahmad Kaikaus while mentioning the scenario of Savar and Ashulia area of Dhaka before and after setting up EPZ.

BEPZA Executive Chairman Major General Md Nazrul Islam described the background and purpose of the helpline (16128) in his welcome speech.

Dedicating this helpline for Mujib birth centenary he said, this is a milestone towards digital Bangladesh and to fulfill the commitment of the government to ensure workplace safety and workers’ rights.

"It will help us in addressing the grievances and improving the working conditions effectively," he added.

Ambassador and Head of delegation of the European Union to Bangladesh Rensje Teerink said that BEPZA and Bangladesh is on right track for producing diversified products.

European Union is ready to support any welfare initiatives taken for the welfare of the workers, she said while expressing her satisfaction on EPZ working environment.

Among others, Secretary, Legislative and Parliamentary Affairs Division of Ministry of Law, Justice and Parliamentary affairs, KM Abdus Salam, Secretary, Ministry of Labour and Employment, Paban Chowdhury, Executive Chairman of BEZA including the high officials of different ministries and organisations, among others, were present at the programme.