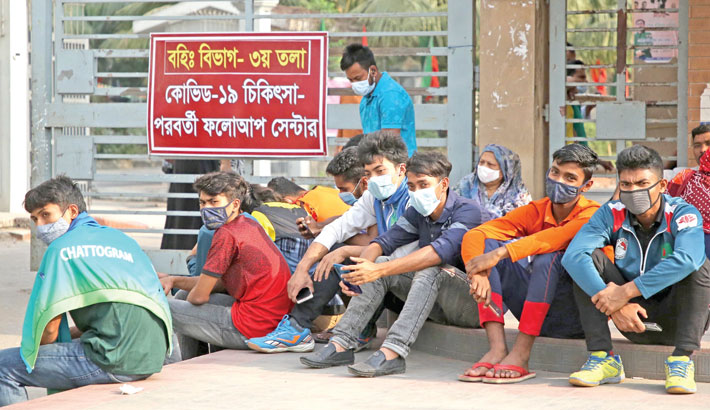 Athletes of Bangabandhu Bangladesh Games wait for Covid-19 tests in front of Mugda Medical College and Hospital in the capital on Sunday ahead of the event, scheduled to start on April 1. —Sun photo

Bangladesh Olympic Association on Sunday said that they have taken all proper measures to control any disastrous situation in the upcoming Bangabandhu Bangladesh Games, scheduled to start on April 1.

The ninth edition of the country's biggest multi-sports event Bangabandhu Bangladesh Games will start in two days with a colourful inaugural ceremony on Thursday at the Bangabandhu National Stadium.

However, the recent number of COVID-19 cases and death tally arose few questions about holding the event but BOA dismissed all the speculations of rearranging the Games.

“We have formed a medical board consisting of Dhaka Medical director, PG Hospital director, CMH director and divisional civil surgeons. We also included local and private hospitals and medical centres in the board so that we can get any kind of help at any time,” said BOA Secretary General Syed Shahed Reza in a pre-event press conference at the BOA auditorium.

“The members and representatives of the medical board will be present in the venues with all medical equipment and ambulances during the Games. They will also ensure that the participating athletes and officials can come to the venue with proper health measures. The board has already started to work in their respective cities and divisions,” he added.

Prime Minister Sheikh Hasina is expected to inaugurate the meet virtually on Thursday.

The Games is scheduled to be held from April 1 to 10 at 29 different venues in seven divisions.

“We have also arranged rapid PCR test facilities in the venues. We have also arranged thermal checking. If an athlete shows symptoms, we will immediately isolate him and send him for further observation. ICDDRB will provide us assistance in these cases,” said BOA Vice-President Sheikh Bashir Ahmed.

BOA also decided to limit the numbers of spectators in the venues. The spectators will enter the venues following strict health measures. Besides, the organisers requested the National Sports Council and the Sports Ministry to shut down the local shops and roads outside of venues during the match days.