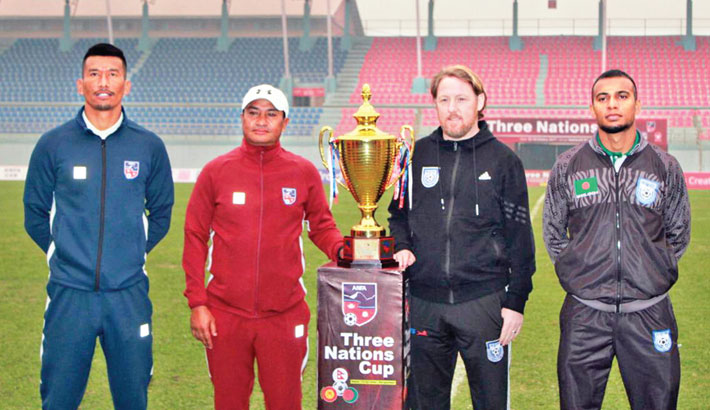 Bangladesh national football team will look forward to ending their 26 years trophy drought at away tournaments when they lock horns against hosts Nepal in the final of the Three Nations Cup at Dasharath Rangasala Stadium in Kathmandu today.

The men in red and green last won the Burma Tournament, also known as Four-nation International Invitational Football Tournament, in 1995.

Bangladesh then won two international titles -- SAFF Championship in 2003 and Mujib Barsho FIFA International Football Series against Nepal in 2020 both on their home soil. Meanwhile, Bangladesh U-23s earned a gold medal in the South Asian Games in Dhaka in 2010.

The Mujib Barsho FIFA International Football Series was, however, a bilateral competition. So the team also has a chance to end their trophy drought of a multinational tournament after 18 years.

National team captain Jamal Bhuyan believed that they had a good chance to win the trophy.

“We have a good chance to win the trophy. We have good scorers, good players,” Jamal said before the final.

National team head coach Jamie Day, however, said he is not focusing on the result of the game as his target is to get players ready for World Cup qualifiers.

“We’re looking forward to the final tomorrow (Monday). We know it is going to be an extremely tough game. Hopefully, we can play well,” said Jamie in a pre-final press conference on Sunday

“If we win the trophy, great, if not as I said before we get the experience for new players. The focus is not on the outcome here but on getting players ready for June. If we win the final, great but the main focus is giving players game time,” he added.

Bangladesh earlier reached the final as toppers with one win and a draw while Nepal reached with two draws.