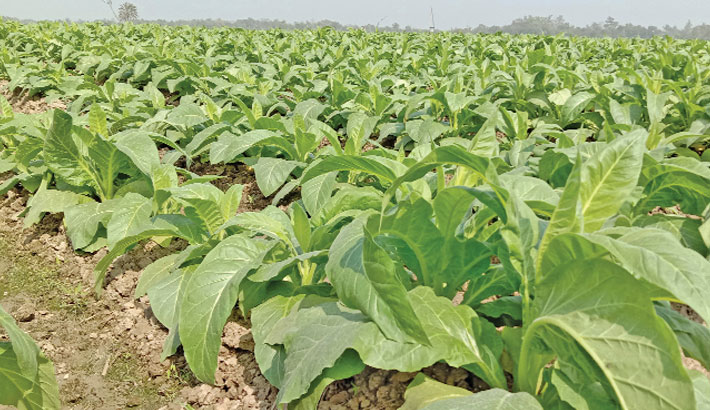 NATORE: The harmful tobacco cultivation is going on in Lalpur upazila of the district in collaboration with the British American Tobacco Company (BAT).

Local farmers are being cultivating tobacco every year instead of paddy and rabi crops in the fertile croplands. Nothing can stop them from cultivating such harmful crop.

As a result, the fertility of the land is declining and the people of Lalpur are suffering from health risks including adverse effects on the environment due to tobacco poisoning.

Officials of Agriculture Department say, "Farmers are losing every year because of the high cost of labourer and the lack of a fair price for contemporary crops, including rice. As a result, they are cultivating tobacco in the hope of making more profit ignoring the health risks.”

Sources said, the British American Tobacco Company has been providing advance loan to the tobacco growers for purchasing seeds, fertilizers. They provide Tk 4,200 for cultivating tobacco in one bigha as advance loan, and later they buy the produced tobacco from the farmer's house at the fair price.

Afzal Ali, a tobacco farmer of Abdulpur area, said His home in Kathalbaria and he is a sharecropper. He has leased 4 and a half bighas of land in Chandigachha village of Abdulpur area to cultivate tobacco. He is doing this as it returns profit to him. But, regular crop cultivation is not profitable.

He explained that Tk 20-30 thousand needs to cultivate tobacco in one bigha land and produced tobacco will be sold at Tk 60 to 70 thousand.

Moreover, company men give them money, fertiliser and seeds to cultivate tobacco and also tell the price when they plant tobacco.

Another tobacco grower Shahin said that at present labourer cost is so high and they do not get fair price of their yields thus they losing money. But, they can earn profit by cultivating tobacco without investing money.