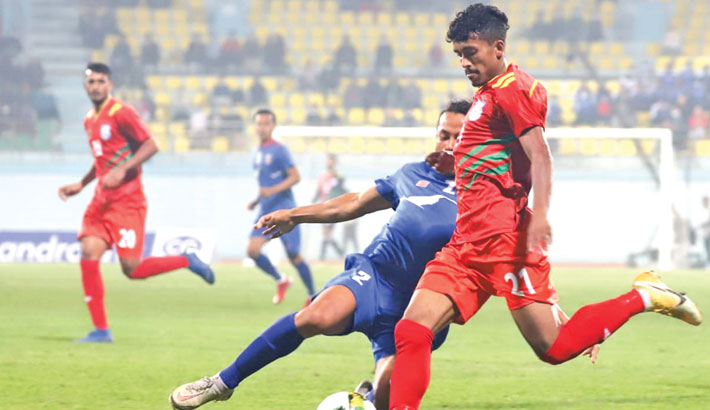 Bangladesh played a goalless draw against Nepal in their last league match to set a final against the hosts at Dasharath Rangasala Stadium in Kathmandu on Saturday.

The men in red and green, who confirmed their final berth after a 1-0 win over Kyrgyzstan U-23s in their first match, will lock horns against the hosts in the final on Monday at the same venue.

Nepal, who played a goalless draw against Kyrgyzstan U-23s in their first match, earned a much-needed point from the Bangladesh game to book their place in the final as the second-best team.

“We keep a clean sheet, well for tonight. I'm looking forward to the final which will be tough. Hopefully, we can get some goals when we play against Nepal in the final and that will be very nice,” Bangladesh head coach Jamie Day said after the match.

Bangladesh appeared on the field with a completely different playing XI from their last game.

Captain Jamal Bhuyan, who played as a substitute after half-time in the first match, started the game on Saturday. Defenders Md Emon and Md Mehedi Hassan made their debuts in the contest.

In the 21st minute, a header from Nepal forward Anjan Bista missed the target after midfielder Tridev Gurung sent him a cross inside the box.

Midfielder Manik Hossain Molla and defender Mehedi failed to send the ball home off a direct free-kick from Jamal in the 37th minute. Three minutes, Jamal's shot went off the target from a free-kick.

Nepal forwards made several eye-catching efforts before half-time but failed to bag any success.

Nepal continued keeping pressure on Bangladesh's defence after half-time but Bangladesh goalkeeper Shahidul Alam Sohel and the defenders successfully kept their post unbeaten and denied all the attempts from the home side.