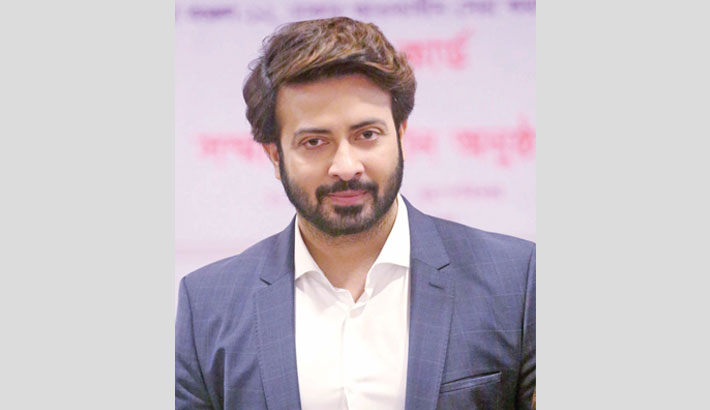 Today is the 41st birthday of Dhallywood super star Shakib Khan. His fans, friends, and well-wishers have sent greeting messages to the popular actor on his birthday. Celebrities and her co-artistes also take to social media and shower love on Shakib Khan with birthday wishes.

Shakib Khan has no special plan to celebrate his birthday. Today he will be busy with shooting for a film in Pabna.

Shakib Khan is a popular film actor of the country. He made his debut in the film industry  through Sohanur Rahman Sohan’s  film ‘Ananta Bhalobasha’ in 1999.  Shortly after a few years, Khan established himself as one of the most successful actors in Bangladeshi film history. In his career, Khan has received various awards, including four National Film Awards for Best Actor, for ‘Bhalobaslei Ghor Bandha Jay Na’ (2010), ‘Khodar Pore Ma’ (2012),  ‘Aro Bhalobashbo Tomay’ (2015) and and Shatta (2017), eight Meril Prothom Alo Awards, three Bachsas Awards and five CJFB Performance Awards.

Shakib also a producer. His first-produced movie is ‘Hero: The Superstar’.

Shakib Khan was born on 28 March in 1979. Besides education, he also had an interest in dancing. He completed a dancing course under film choreographer Aziz Reza. In 1998 he went to Bangladesh Film Development Corporation (BFDC) with his dance master Aziz Reza, where he met a photographer who asked him to take part in a photo shoot.

During the photo shoot, film director Abul Khair Bulbul noticed Shakib and offered him the leading role in his movie ‘Shobaito Shukhi Hote Chai’. Shakib accepted the offer. But Shakib Khan made his debut in the big screen with ‘Ananta Bhalobasha’ directed by Sohanur Rahman Sohan.