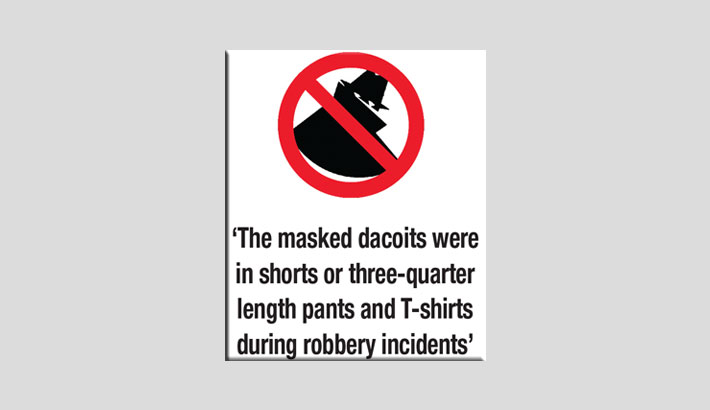 Though a number of robbery incidents have taken place in various upazilas of Dhaka recently, law enforcement agencies could not solve any of them.

In the last two months, some 12 such incidents have occurred in Dohar, Keraniganj and Nawabganj of the district. Members of the criminal gangs took away gold ornaments, cash and valuables.

The Superintendent of Police (SP) of Dhaka has formed a committee comprising three additional SPs, some ASPs and some other officers to address the situation and identify the criminals.

Surveillance of intelligence and police patrolling have also been enhanced in this regard.

When asked, SP of the district Maruf Hossain Sarder told the Daily Sun that they are hunting for the robbers.

The police suspect that a single robbery gang committed all the robberies. The masked dacoits were in shorts or three-quarter length pants and T-shirts during the incidents.

They got into the houses by climbing over walls and breaking window grills. They made off with gold ornaments and cash after tying the residents with rope at gunpoint, according to the sources.

On March 9, a group of robbers stormed Rokon Uddin and Kamruzzaman’s houses at Surain in Nawabganj. The criminals robbed them of gold ornaments, cash and valuables.

A case was filed in relation to the two incidents at Nawabganj Police Station.  As per the case, the dacoits were wearing shorts and T-shirts.

On March 4, a group of robbers entered the house of local Jubo League leader Sheikh Shahabuddin at Ramerkanda in Keraniganj. The criminals wearing the same type of dresses walked off with gold ornaments and Tk 12 lakh in cash.

On February 16, a group of robbers stormed a house at Joypara in East Letokhola in Dohar and looted gold ornaments and Tk 1.30 lakh.

Azizul, manager of the house, filed a case at Dohar Police Station.