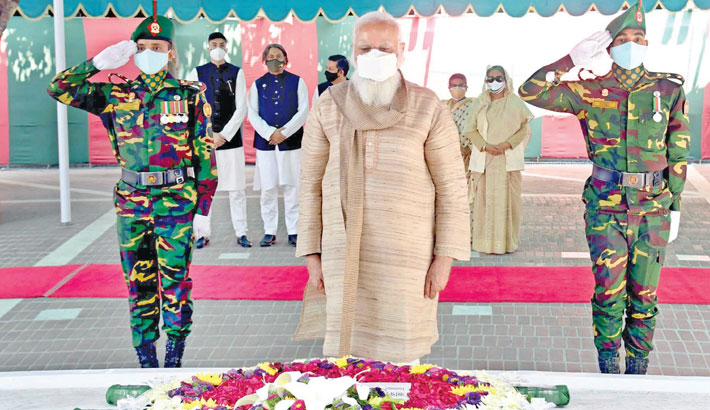 Indian Prime Minister Narendra Modi stands in solemn silence after placing a wreath at the grave of Bangabandhu Sheikh Mujibur Rahman at Tungipara in Gopalganj on Saturday. Prime Minister Sheikh Hasina and her younger sister Sheikh Rehana were present on the occasion. —PMO photo

Indian Prime Minister Narendra Modi paid tribute to Bangabandhu Sheikh Mujibur Rahman at his final resting place in Tungipara of Gopalganj as the first foreign Head of Government on Saturday, the second day of his official visit to Bangladesh.

Prime Minister Sheikh Hasina, accompanied by her younger sister Sheikh Rehana, welcomed her Indian counterpart with a bouquet of flowers when the Indian Premier reached the Bangabandhu Mausoleum Complex at 11:30am.

Narendra Modi placed wreaths at the tomb of the architect of independent Bangladesh and stood in solemn silence for some time as a symbol of deep respect to Bangabandhu.

The Indian Premier arrived in Tungipara by a helicopter after offering morning prayers at the Jeshoreshwari temple in Satkhira.

and other martyrs of August 15 carnage and martyrs of Liberation War, was also offered.

The Indian Prime Minister signed the visitor’s book and planted a Bakul sapling at the Mausoleum Complex to mark the historic occasion.

“The life of Bangabandhu epitomised the freedom of struggle of the people of Bangladesh for their rights, for the preservation of their inclusive culture and their identity,” Modi wrote.

He also mentioned, “His indomitable spirit and fortitude inspired millions, who emerged victorious despite challenging circumstances.”

On behalf of the people of India who revere Bangabandhu as a hero, Modi said, “I pay humble homage to this great statesman of the 20th century. Bangabandhu is etched in the collective memory of the subcontinent, whose history he reshaped through the sheer force of his commitment and sacrifice.”

“In this historic Mujib Barsho, I am confident that his eternal message of equality, freedom, justice, and inclusion will continue to guide our thoughts and actions.”

Narendra Modi, a big admirer of Bangabandhu, expressed his eagerness to pay a visit to the mausoleum of the greatest leader of the country a year ago before the postponement of his scheduled visit to Bangladesh for presenting the keynote speech at the inaugural event of the architect of Bangladesh’s birth centenary.

When Gandhi Peace Prize 2020 was conferred on Bangabandhu Sheikh Mujibur Rahman, on March 22 this year, describing Bangabandhu one of the greatest leaders of our subcontinent, Narendra Modi twitted, “Year 2020 marked the birth centenary of Bangabandhu. He remains an icon of indomitable courage and tireless struggle for his millions of admirers.”

“My heartfelt homage to Bangabandhu Sheikh Mujibur Rahman, a champion of human rights and freedom, on his birth anniversary. He is a hero for all Indians too. It will be my honour to visit Bangladesh later this month for the historic #MujibBorsho celebrations,” the Indian PM wrote on his twitter account on March 17, 2021, while paying tribute to Bangabandhu on his 100th birth anniversary.

Earlier, a year ago, on March 17, 2020, on the birth centenary of Father of the Nation, Modi twitted to show his respect to the great leader.