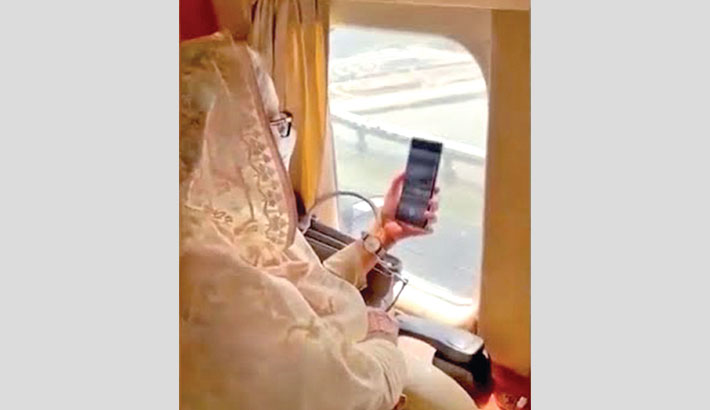 Prime Minister Sheikh Hasina along with her younger sister Sheikh Rehana on Saturday took an ariel view of the Padma Bridge project and saw its progress.

Sheikh Hasina and Sheikh Rehana took a helicopter from Tungipara at noon and took the ariel survey of the country’s largest under-construction bridge expected to open to traffic by 2022.

The Prime Minister and her sister were returning from Tungipara to Dhaka paying homage to Father of the Nation Bangabandhu Sheikh Mujibur Rahman on the occasion of the birth centenary of Bangabandhu and the Golden Jubilee of Independence, reports UNB.

Prime Minister’s Deputy Press Secretary Hasan Jahid Tusher said Sheikh Hasina also took videos of the 6.15-kilometer long bridge as she witnessed the historic establishment as its all the 41 spans have been installed.

He said it was a historic moment for the two sisters, particularly the Prime Minister, because she saw the project for herself for the first time since March 17, 2020 due to the outbreak of the Covid-19 pandemic in the country.

The last span (41st span) of the long-cherished Padma Multi-Purpose Bridge was installed on December 10, making the entire bridge visible.

The 41st span was put on 12 and 13 pillars, making 6.15 km main structure of the Padma Bridge visible. It is the largest infrastructure in Bangladesh since independence.

Initiated by Prime Minister Sheikh Hasina, the construction work on the bridge began in December, 2014 with the government’s own fund as the World Bank stepped back from funding it against false allegation of misappropriation of funds.

China Major Bridge Engineering Company (MBEC), a Chinese contractor Company, is carrying out the main construction work while the river management is being done by Sino Hydro Corporation of China.

The double-deck bridge, having road and rail tracks, is expected to contribute around 1.3 to 2 percent to the annual GDP growth, reduce poverty and increase economic activities of the people of the neglected southwestern region.

The Rail Link through Padma Bridge, expected to be completed by June 2024, to improve accessibility of Dhaka with central and south western regions of the country.

The first phase of the ‘Padma Bridge Rail Link Construction Project’ will establish a rail link between Mawa and Bhanga via Janjira and Shibchar through the Padma Multipurpose Bridge. This will connect Dhaka, Narayanganj, Munshiganj, Shariatpur, Madaripur, Faridpur, Gopalganj, Narail and Jashore.