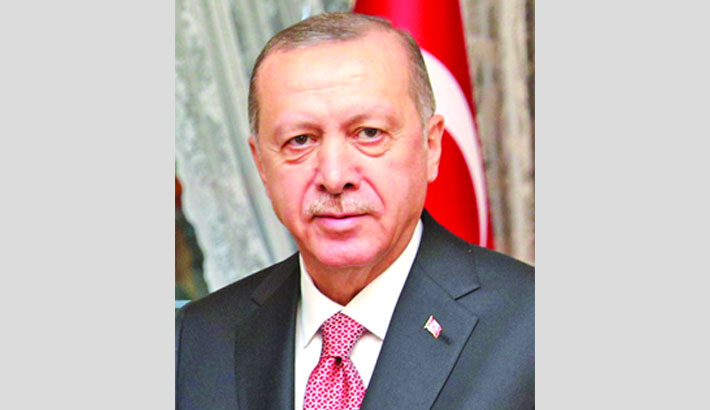 Joint efforts in 2020, declared as “Mujib Borsho” on the occasion of Bangabandhu’s birth centenary, helped boost ties and cooperation on all areas on the basis of the common interest of peoples.

“The sentiment of brotherhood among our peoples, rooted in our common historical and cultural heritage, strengthens our mutual will to further develop our relations,” he said.

Erdogan made the remarks in a message addressed to Prime Minister Sheikh Hasina on the occasion of Bangladesh’s 50 year of Independence and Bangabandhu’s birth centenary celebrations.

“Your (Hasina) esteemed father, the founding President of Bangladesh Bangabandhu Sheikh Mujibur Rahman, has taken his place among the prominent statesmen of the 20th century with the struggles he went through and the sacrifices he made for his nation throughout his life,” said the Turkish President.

He renewed his best wishes for the well-being and prosperity of the brotherly people of Bangladesh, as well as personal health and happiness of Prime Minister Hasina.

On the twin occasions, President Erdogan extended his heartfelt congratulations to the Prime Minister and the people of Bangladesh on behalf of his country.

He thanked the Prime Minister for the invitation to the “Mujib Borsho” celebrations extended on the occasion of the opening ceremony of Bangladesh Embassy’s new building in Ankara in September 2020, and through a letter dated Nov 2, 2020.

“Unfortunately, it has not been possible for me to accept your invitation because of the Covid-19 pandemic, which continues to affect the entire world,” said the Turkish President.

He expressed his desire to visit Bangladesh in the upcoming period, if circumstances permit, according to the message shared by the Turkish Embassy in Dhaka.