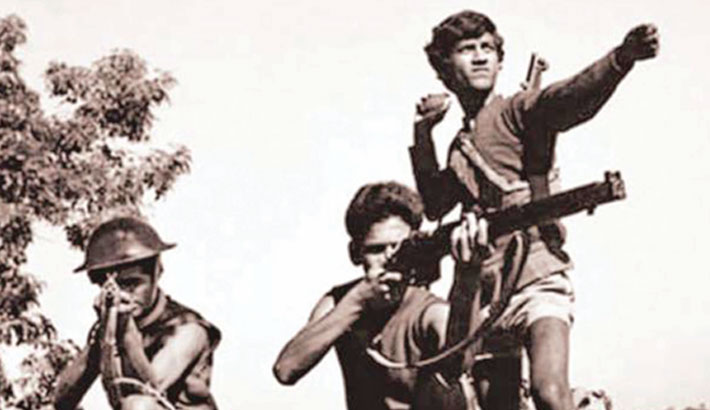 Our Independence Day has come again for us. For many people, all it means is lively memories of past excruciations and a day off work. For many others, it means so much more. A classic! Only when one knows this country’s history and all the blood and treasure that were sacrificed during such a profound revolution in 1971 one can develop an appreciation to be born here. It is amazing how many different historical monuments, cultures, and natural wonders are scattered throughout this enormous land.

Happy Independence Day goes to a shining star, a bright light to the land where heart and laughter find true friends. To the diverse peoples, it offers sanctuary, all of whom never say die.

Bangladesh today has yet to exorcise the demons of 1971. I wish for every people that our excitable peoples, our brilliant and resourceful peoples enter this day committed to being less quick to fight one another and quicker to work together discarding the anti-Islamist-evil-reactionary and anti-liberation forces in the guise of humans who collaborated with the Pakistan army and murdered countless Bengalis have established their strong and wealthy positions in the soil of Bangladesh during 15 years of military dictatorial regimes in the past. After 1991 national polls, their mango-twigs who ruled the country have further ravaged the country to destroy the unexpended spirits of our glorious Liberation War. In 1971, Bangladesh’s people learnt the evils of both racism and religious extremism. It is a lesson we should not forget at our peril.

Today is an auspicious day for our country because, on this day, we are entering the 49th year of our Independence. Today, we re-dedicate ourselves to the progress and prosperity of our nation; to the welfare of all our people; and today, we salute our beloved bicolour flag. On 26 March 1971, the independence of Bangladesh was declared and the Liberation War began. The people of the then East Pakistan took part in this war to liberate Bangladesh from the oppression of military leaders of Pakistan.

Independence for Bangladesh was gained through a nine-month people’s war against the Pakistani Army, which resulted in the loss of about 3 million lives. The Freedom Fighters, with military support from India, defeated the Pakistani Army on 16 December in the same year. Thus Bangladesh came into being. Woodrow Wilson’s words are relevant here for us, "Liberty has never come from the government. Liberty has always come from the subjects of it. The history of liberty is a history of resistance."

But the people of Bangladesh discovered their identity through the Language Movement in 1952. The struggle to establish their identity and national spirit began soon after 1947, when the British left India dividing it into two countries: India and Pakistan. Bangladesh, then East Pakistan, was part of Pakistan, which was put together by combining two geographically, culturally, and linguistically separate groups of people.

The people of Bangladesh soon realised that being a part of Pakistan, which was created on the two-nation theory, there was little scope for the distance culture of Bengalis to flourish. The Bengali language is the most important vehicle of cultural expression for the people of this land. The refusal of the central government in West Pakistan to grant official status to the Bengali language became the focal point of struggle.

In the elections of December 7, 1970, the Awami League won 160 out of 162 seats in the then East Pakistan and would have had a clear majority in the new assembly. Bangabandhu Sheikh Mujibur Rahman became the majority party leader of the Pakistan National Assembly. The military rulers of Pakistan refused to allow the Awami League to form a government. A heinous conspiracy was plotted by the then Pakistani military dictator president Yahya Khan along with Pakistan’s People’s Party chief Zulfikar Ali Bhutto. Even though a conspiracy was being planned, General Yahya Khan was careful not to let this be known. A full-scale movement of non-cooperation with the military government began in early March 1971 under the dynamic and able leadership of Bangabandhu. Thus Bangladesh plunged into a gory war seeking its birth.

The Pakistan Army began their genocide by attacking the innocent Bengalis of Dhaka city and then the whole land of Bangladesh with their sophisticated weapons. The dwellers of Dhaka city and the whole country never confronted such unimaginable cruelty. The Pakistani army systematically massacred three million Bengalis and unleashed a brutal war against us to prevent our shoot for independence. But the brave people of this beloved land did not let the dream of the encircled flag of red and green fall down to dust.

This day reminds us of the supreme sacrifice of our freedom fighters who will ever shine in our hearts like the luminous stars in the sky. But at the same time, we must remember the spirit of the liberation war. So, let all of us remember the spirit of Independence Day and see to establish just laws in the country to build it as a country which rightly be called “Golden Bangladesh.”

The writer is an independent political analyst who writes on politics, political and human-centred figures, current and international affairs.