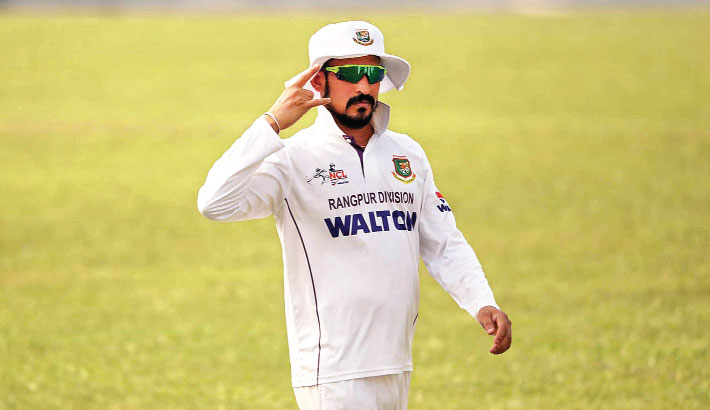 Nasir Hossain struck a brilliant hundred before taking four wickets on Wednesday but Rangpur Division still needed 229 runs against Dhaka Division to win their first-round tier-1 match of the ongoing National Cricket League at the BKSP.

Sylhet Division’s Zakir Hasan made unbeaten 118 runs as they took a nine-run lead in their second innings over Khulna Division with five wickets in hand in Khulna at the end of the third day’s play in the other tier-1 contest.

Rajshahi Division still needed 136 runs with five wickets in their hands while chasing a target of 283 runs against Chattogram Division in Rajshahi in a tier-2 encounter.

Dhaka Metropolis are still on top against Barishal Division in Barishal in the other tier-2 match as Barishal just took a slight five-run lead with only three wickets to play on the final day of the first-round match.

Resuming on 194-7, Rangpur were bowled out for 230 runs in their first innings after Nasir made 115 runs off 252 balls with 11 fours and four sixes. Left-arm spinner Nazmul Islam claimed 4-89 for Dhaka.

Nasir then claimed 4-21 while Sohrawordi Shuvo and Mahmudul Hasan picked up three and two wickets respectively as Rangpur bowled out Dhaka for 128 runs in their second innings to set for a target of 264 runs.

Rangpur lost both their openers early in the chase and made 35-2 at stumps of the third day.

Zakir then completed his sixth first-class ton while Amite Hasan made 66 runs as Sylhet scored 250-5 in their second innings at stumps.

Chattogram were dismissed for 147 runs in their second innings after resuming on 43-5 on the third day.

Irfan Sukkur made the highest 65 runs.

Rajshahi reached 147-5 with Junaid Siddique remaining not out on 51 as they still needed a herculean effort to win the contest.

Resuming on 324-7, Dhaka Metro made 413 runs in their first innings after Shohidul Islam completed his maiden first-class ton, making 106 off 150 balls.

Barishal opener Moinul Islam made 63 runs but they lost wickets at regular intervals to be reduced at 177-7 at the end of the third day’s play.