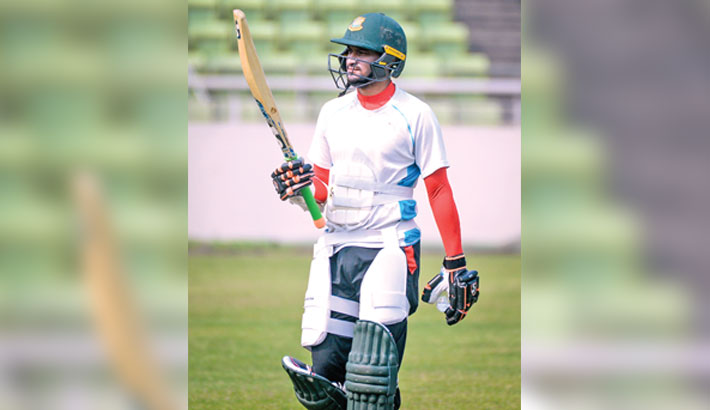 The leading all-rounder of the world, Shakib Al Hasan, began his preparation for the Indian Premier League amid all controversy at the Sher-e-Bangla National Stadium on Wednesday.

Shakib, who turned 34, will be eyeing to make his comeback noteworthy in the IPL where he has a RS 3.2 crore ($438,000 approx) contract with Kolkata Knight Riders after he missed the last edition due to serving a ban by ICC for failing to report corrupt approaches.

Shakib, who did not travel to New Zealand with Bangladesh team for the ongoing series after the board granted him paternity leave, arrived on March 23 from the USA.

Just ahead of his return he took the country’s cricket fraternity by storm by coming into a live interview where he stated that he was misinterpreted by the board regarding his IPL participation as he suggested the board claimed that he was not interested in playing Test which he revealed as untrue.

Though BCB decided to reconsider his NOC after being embarrassed by his accusation, according to the board insiders they will not withdraw his NOC that paved the way for him to travel to India to take part in the tournament.

Knowing his immediate future, Shakib did not wait long enough to get back to training considering he is well aware that he needs to get off the rust that is expected to come following his break from cricket as he was ruled out from the second Test against West Indies after sustaining a groin injury.

“Cricket is not like I will come from America and perform straightway because you need to prepare for it,” Shakib was quoted ahead of his return to the country and it looked like he was driven by his words.

The all-rounder spent more than an hour in an individual training session which was largely occupied with his batting. Although a lot of things happened in the country after his interview, there was no sign of strain in Shakib’s face about these worldly things.

Shakib opted to use the national team’s throw down specialist Bulbul to bowl him short deliveries that he tried to dispatch square the wicket.

Though he missed some and was bowled on a few occasions it served his purpose as he sweetly timed a few of them to raise his confidence that must have gone higher after he did not feel any pain while stretching with his pads on implying his groin recovered sufficiently.

The left-arm spinner also bowled a couple of deliveries to get back his rhythm but that looked more for judging his physical condition than anything else.

“I think he is fine and hardly looked troubled,” said a BCB physician who was monitoring his development in the nets.

KKR said that their foreign recruits have started arriving with West Indian Andre Russell and Sunil Narine landing in India during the early hours of Tuesday, checking into the team hotel to begin their seven-day quarantine.

Shakib will also have to complete a seven-day quarantine and will be flying to India anytime after completing his engagement in the capital on Independence and National day on March 26.

The ace all-rounder is expected to be in a program that will be graced by Prime Minister Sheikh Hasina along with other foreign leaders who arrived to attend the celebrations to mark the birth centenary of Bangabandhu Sheikh Mujibur Rahman and 50 years of the war of liberation of Bangladesh.