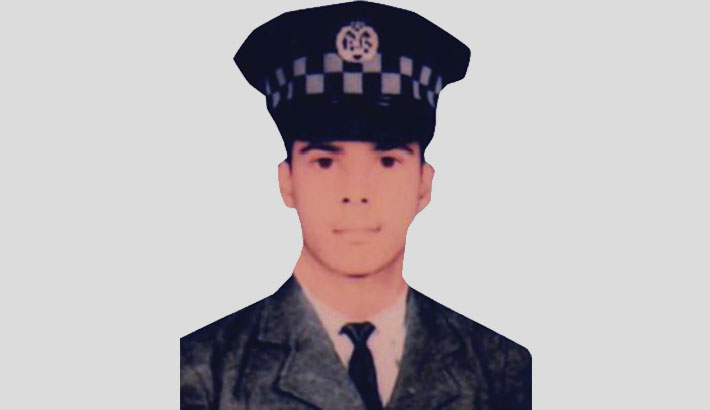 Just two months before the horrific 25 March ’71 I completed three and a quarter year Apprenticeship Course in Pakistan Air Force with distinction and was adjudged as the best ‘All-Round’ apprentice in the passing-out parade being awarded prestigious “Best-All-Round” trophy.

I was newly posted to PAF Base Drigh Road, Karachi, Pakistan. Eventful March ‘71 concerned the Bengalee PAF personnel seriously and being subjugated Bangalees of Pakistan we were circumstantially politically aware of the existing unstable situation of Pakistan. As such we had been closely observing the volatile political developments in the then East Pakistan. Bangabandhu’s 7 March history’s most groundbreaking fiery speech tremendously heightened and invigorated the most repressively suffered Bengalee defence personnel in Pakistan Defence Forces particularly. We felt the dire necessity of our solemn engagement in the struggle for independence of our beloved motherland. We made up our revolutionary mind to launch a decisive war against the Pak oppressors. Since then we sensed a radical change in their (Pakistanis) attitude in dealing with us Bengalee service personnel. Because of strict military discipline there was no scope to openly protest their malicious attitude towards us. But a subtle strained behavioural outlook could be apparently detected in them.

Subsequent events of March ’71 brought General Yahya Khan much undue advantages to execute Pakistan’s conspiratorial agenda. His so-called political dialogue with Bangabandhu was nothing but a double-dealing political hypocrisy of Pakistan ruling class.

From the beginning of Mach ’71 until 25 March the military ruler indispensably needed to gain time for preparations for his ultimate aim of military crackdown on the freedom-struggling mass of East Pakistan. But he knew well that to deal with the Bengalee defence personnel in Pakistan Defence Forces would certainly not be so easy as with the unarmed civilian. They apprehended highly bloody reactionary revolt from the Pakistani trained skilled and indomitable Bengalee defence personnel in Pak defence forces. Mentionable, 1965 Indo-Pak war taught the Pakistanis a good lesson how undauntedly and valiantly the Bengalee members of Pak defence forces fought with high sense of patriotism in the war fronts. Merely in five years time Pakistan surprisingly suppressed our (Bengalees) heroic contributions in that war. In continuation with their evil-designs under the circumstances they took subtle measures to shrewdly deal with the Bengalee personnel.

In the evening of 25 March ’71 General Yahya Khan on an emergency address to the nation over Pakistan TV, capitalizing the events of unprecedented mass movement, Bangabandhu’s non-cooperation movement, historic 7 March fiery speech, virtually non-existence of Pakistan anywhere in East Pakistan, Military Junta’s no hold on state functionaries and more on excuses of integration of Pakistan, in a bid to legitimize Pak Junta’s planned heinous military option, defiantly and blatantly he (Yahya) unilaterally held Bangabandhu Sheikh Mujibur Rahman responsible for existing volatile situation in Pakistan. Revengeful, adamant, egoistic the military ruler uttered, “This crime cannot go unpunished. My ultimate aim remains the same” and so on. We were also watching TV in the Air Base recreation room. We clearly understood what we had to understand what he meant by that remark. Grave concern associated with worries and suspicions gathered in our mind. We returned to our barracks, passed the night sleeplessly, trying our utmost to collect the news of apprehensive happenings in Eastern Wing. Very cautiously we tuned in to BBC, VOA, Indian Akashbani under the cover of mosquito nets and keeping our own men on watch for any Pakistani Intelligencer outside our room.

On that very night we witnessed how the heavily equipped with lethal weapons and ammunitions Pak Army were boarding on PAF C-130 aircrafts outside on tarmac adjacent to our barracks, headed for flying to East Pakistan destination. The unusual troop movement was scheduled to be part of grisly “Operation Search Light” for impending brutal massacre of innocent Bengalees.

At that night I was scheduled to be on guard duty in strictly restricted equipment spot in the Air Base. As I reported for duty I was barred from taking up arms and ordered by superior officer to immediately go back to barrack. Military order cannot be questioned. Silently I returned with enormous agony spread over my mind. Thus they started with revised strategy of virtually undeclared declaration of war against the instantaneously disarmed confined Bengalee service personnel.

Despite horrors of the Pakistani forces we didn’t lose our moral strength. Rather we were highly determined and convinced to hear the most expected news from Bangabandhu’s leadership. As the Bangabandhu’s long-awaited subsequent “Declaration of Independence” hour came we were overwhelmed with joys, an amazing unforgettable moment that faded away all our sorrows of sufferings spontaneously.

On early morning of 26 March ’71 all the PAF personnel were ordered by the Base Commander to assemble on the parade ground without any excuse. We carried out. He, to some extent, equivocally ordered East and West Pakistani servicemen to fall out separately. He further ordered that with immediate effect the East Pakistani servicemen must stay in their barracks till further order. We were immediately disarmed, our movement restricted and constantly watched by the Pak DFI (Defence Force Intelligence).

The blatant divisive measures adopted by the Pak ruling Junta culminated in two separate segments of Pakistan. The steps fortunately accelerated our struggle for independence. On the spot we solemnly pledged to materialize our dreams into reality.

In the meantime PAF started psychological treatment with us to avoid any grave repercussion from the best trained and highly skilled Bengalee servicemen. They kept us occupied with Pakistani cultural and patriotic programs as the measure of brain-washing and divert our attention from our heart-rending freedom-loving thoughts.

At the same time we were forced to face the “Screening Board” comprising Pakistani officer as head and some Pakistani minded Bengalees as the members of the Board set up by the PAF authority, in a bid to and ultimately to convert us Bengalee’s mentality to opt for integrated Pakistan. Politically motivated questions were asked by the Board. Those who satisfied the Board, were certified as “Real Assets of Pakistan” and given “Clearance Certificate” to serve the vested interests of the Pakistani Masters. Most regrettable was that some Pakistani-minded Bengalee service personnel were lured by them (Pakistanis) and so they returned to Air Base after spending leave in Bangladesh when thousands of Bengalees were being indiscriminately slaughtered on our sacred soil by Pak Army. Pathetically mentionable, at that Black Night of 25 March ’71 some responsible senior most Pak Army’s Bangalee officers cooperated with Pak Army brutalities in Bangladesh even by doing the duty of unloading lethal arms and ammunitions from the Pakistani ship “Swat” brought for use in “Operation Search Light” to massacre the freedom-loving Bangalees. None of such traitors could deter the patriotic Bengalee segments of Pakistan Defence Forces from their solemn duty to motherland. These were the freedom-loving professionally skilled Bengalee members of Pak Defence Forces including EPR (Now BGB) Police who deeply felt the dire necessity of building first stiff resistances against the Pak aggressors. So the immediate armed confrontation against Pak occupation forces at that 25 March “Black Night” was in essence of our freedom struggle.

With that end in view like many other Bengalee defence personnel, I also defected Pakistan Air Force escaping heavily guarded Pak Military area through highly life risky journey to reach my planned destination to friendly India and actively engaged in our great Liberation War till victory. Worth mentioning, bitter experiences (though a useful lesson for us) of Pak Army’s genocidal “Operation Search Light” atrocities actually gave birth to the conception of an organized disciplined armed struggle by the Bengali defence personnel with their best-acquired Pak military expertise against Pak Army crackdown. Overcoming the nine-month-long bloody War of Liberation the present boastful state of Bangladesh Armed Forces is the fruition of that great conception.

The writer is an Ex-Corporal and Freedom Fighter, Bangladesh Air Force