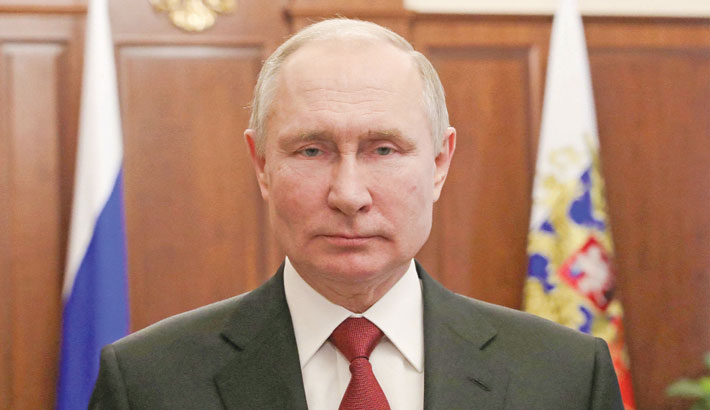 President Vladimir Putin on Tuesday received his first dose of a coronavirus vaccine, his spokesman said as Russia looks to boost a vaccination campaign that is faltering despite having produced three home-grown jabs, reports AFP.

Putin joined other world leaders who have received jabs including US President Joe Biden, Pope Francis and Britain’s Queen Elizabeth. But unlike many others who were vaccinated in public, Putin’s vaccination took place in private. Kremlin spokesman Dmitry Peskov told news agencies

late on Tuesday that the 68-year-old Russian leader was vaccinated but did not specify which jab was administered.

“Putin has been vaccinated against the coronavirus. He feels well. Tomorrow he has a full working day,” Peskov said, according to state-run RIA Novosti news agency.

Earlier on Tuesday, Peskov said that Putin, who has never been media shy during his two decades in power, did not want to get a jab in front of the cameras.

“We will not show this, you will have to take our word for it,” Peskov told reporters.

Peskov said the Kremlin chief would receive one of three Russian vaccines, declining to specify which one “on purpose”.

Russia has developed three vaccines—Sputnik V, EpiVacCorona and CoviVac—though most of the attention has focused on Sputnik, named after the first satellite launched into space by the Soviet Union.

Russia’s vaccination campaign has been slower than in many countries but Peskov said Putin did not have to get vaccinated in public to encourage more Russians to get jabs.

“The president is doing a lot to promote vaccines as is,” Peskov said.

Only about four million of the country’s 144 million people have so far received two doses of a vaccine, while another two million have had a first dose.

Vaccine scepticism runs high in Russia, with a recent opinion poll showing less than a third were willing to be inoculated, and close to two-thirds saying they believed the coronavirus is a man-made biological weapon.

The country has been among the hardest hit by Covid-19, with more than 4.4 million cases of the coronavirus and more than 95,000 deaths.