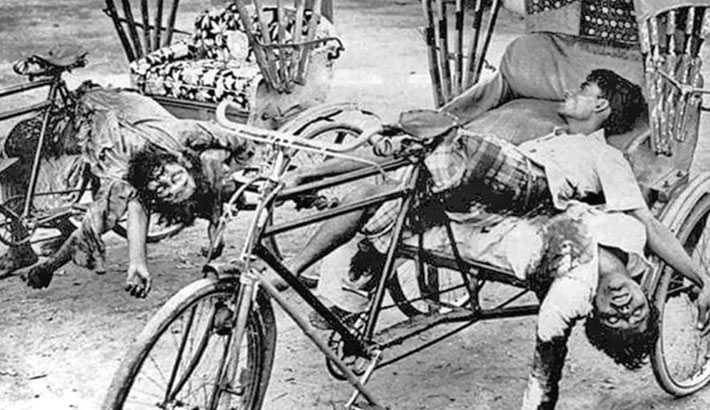 The nation observes Genocide Day today, commemorating the barbaric mass killing committed by the Pakistani occupation forces on the night of March 25 in 1971.

The day will be observed officially for the fifth time in the country as parliament on March 11, 2017 unanimously adopted a resolution to observe March 25 as Mass Killing Day.

On the black night of March 25, the Pakistani military junta resorted to mass killing in Dhaka to implement their blueprint to thwart the Awami League’s assumption of office following the election mandate of 1970.

They also set fire to houses and property and looted business establishments, leaving a trail of destruction.

The government has chalked out various programmes to mark Genocide Day.

Like the previous years, the nation will observe one-minute symbolic blackout from 9:00pm on March 25, recalling the horror of the black night of March 25.  President Abdul Hamid and Prime Minister Sheikh Hasina issued separate messages on the occasion of ‘Genocide Day.’

In his message, the President called for collective efforts to turn the country into ‘Sonar Bangla’ as part of paying everlasting respects to the martyrs of the 1971 genocide.

“We can pay our eternal respect to every soul who gave his (or her) life in 1971 genocide by turning the country into ‘Sonar Bangla’ as dreamt by Bangabandhu,” he said.

The President said, “Today is the dreadful 25th March. On this day in 1971, Pakistani invaders committed the history’s most brutal killings throughout the country including Dhaka”.

“On this day, I recall with profound respect the architect of our independence, Father of the Nation Bangabandhu Sheikh Mujibur Rahman under whose leadership and direction we achieved our independence through a nine-month long armed struggle,” he said.

Prime Minister Sheikh Hasina in her message called upon all to take a vow to uphold the freedom earned through the supreme sacrifice of 30 lakh people and the respect of two lakh tortured mothers and sisters during the Liberation War in 1971.

“On the occasion of the 50th anniversary of the Genocide  Day, we pledge to uphold the freedom that we have earned in exchange of the three million martyrs and the respect of two lack tortured mothers and sisters, ” the premier said.

Noting that the 25th March is ‘Genocide Day’ in the history of the Bengali liberation struggle, the premier said, on this day in 1971, the aggressor forces of Pakistan carried out the most barbaric massacre in Bangladesh.