Fielders down Tigers in tight contest 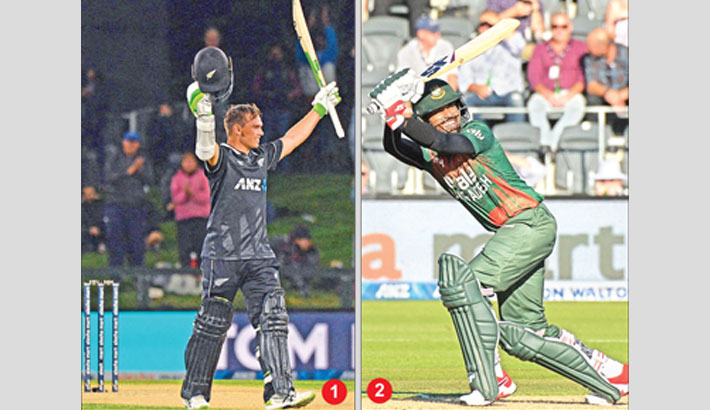 Bangladesh’s sloppy fielding and putting down several important catches at various stages of the game contributed to another defeat against New Zealand despite putting up a decent show with the bat in Christchurch on Tuesday.

Skipper Tamim Iqbal hit 78 while Mohammad Mithun struck a brilliant 73 not out as Bangladesh compiled a respectable 271-6 in their 50 overs after being asked to bat first.

New Zealand skipper Tom Latham then scored a brilliant unbeaten 110 off 108 balls while Devon Conway made 72 runs as the hosts reached 275-5 in 48.2 overs to register a five-wicket win and took an unassailable 2-0 lead in the three-match series.

The Tigers sensed their first victory on New Zealand soil when they reduced the hosts to 53-3 in the 11th over but nothing went right from them thereafter, largely due to the lack of spirited effort in the field.

Latham aided by Conway brought the side back on track, sharing 113 runs for the fourth wicket before Tamim’s direct hit broke the partnership by removing the latter.

With New Zealand still needing 106 runs to win, Bangladesh could have put pressure on the hosts had Mushfiqur Rahim not shelled a catch of James Neesham behind the wicket when he was on just three.

Latham also survived twice on 58 and 67 in the space of just five balls when off-spinner Mahedi Hasan (2-42) missed an easy return catch and thereafter Mehidy Hasan Miraz put down a catch at backward point off a Taskin Ahmed delivery.

Neesham went on to make 30 runs before losing his wicket to Mustafizur Rahman (2-62).

“We couldn’t have a better opportunity. It was something we should have won,” Tamim bemoaned after the defeat. “Such opportunities don’t always come outside the country…I think missing those two catches were the turning point of the game,” he added.

Earlier, Tamim’s 50th half-century only came after surviving an appeal for caught-and-bowled off fast bowler Kyle Jamieson on 34.

The soft signal was out with Jamieson diving forward in his follow-through to take a low catch with both hands on the ball before momentum sent him to the floor.

The TV umpire however gave Tamim not out, much to the disappointment of Jamieson.

Mithun played the key role in slog overs with clattering six fours and two sixes in his innings.

While Soumya Sarkar (32), Mushfiqur (34) and Mahmudullah (16) had little contributions, Mithun kept the scoreboard ticking rapidly with some big shots at the death overs that gave Bangladeshi bowlers a modest total to defend.

The third match will be played at Basin Reserve in Wellington on Friday.