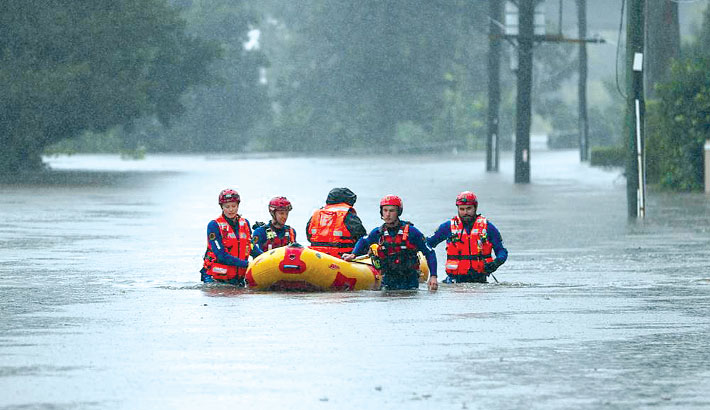 Reports of spiders swarming by residents’ homes to reach higher ground have spread on social media but animals are struggling across eastern Australia.

In the worst flooding in decades, close to a metre of rain has fallen in some parts of New South Wales and more is forecast to come, forcing thousands of people to evacuate.

From a farm in Kinchela Creek, one man posted an image of hundreds of spiders running across a muddy field.

“All the brown you can see is spiders trying to beat the flood water,” Matt Lovenfosse wrote on Facebook, adding that he expected them to soon be inside his house.

In Macksville, Melanie Williams watched as “thousands” of spiders scaled the fence of her back yard, she told ABC news.

“As the water was rising, the letterbox was going under further and further and I could see all these little black things on there and I thought ‘oh my God, they’re spiders’,” she said.

An expert told ABC that, like people and animals, the insects were trying to seek safety on higher ground.

“What happens with the floods is all these animals that spend their lives cryptically on the ground can’t live there anymore,” explained Professor Dieter Hochuli from Sydney University.

But there have been some heroic stories of animal rescue just months after wildfires killed or harmed an estimated three billion animals.

In Sydney a wallaby and a number of birds belonging to Paul Zammit were rescued by his best friend when his house flooded.

“All of the animals survived, but they are soaked,” Zammit explained.

On Monday emergency workers in boats rescued 20 dogs from a kennel threatened by rising water in a Sydney suburb.

Their owners had left them at the kennel when they were told to evacuate but the flooding had spread, the kennel owner told Reuters news agency.

Livestock in farms or pasture have been trapped as rivers burst their banks or fields saturated with rainwater turned to mud.

“There were cows that were up to their head in the water,” one farmer close to Port Macquarie told the Guardian newspaper.

Gavin Saul lost 85 cows in the floodwater, explaining: “They wouldn’t swim and were heading for these trees and got all tangled in the vines.”

Eventually a boat arrived with help and Saul managed to free 11 cows and two calves.

And in Taree, members of a surfing club rescued a cow from breakwaters on the beach and transferred her into a paddock, wrote one woman on Twitter.

But there are some creatures that communities are not as keen to save. Residents of Gilgandra are hoping the rain will drive out the “mouse plague” that has infested their small town with thousands of rodents in recent weeks.