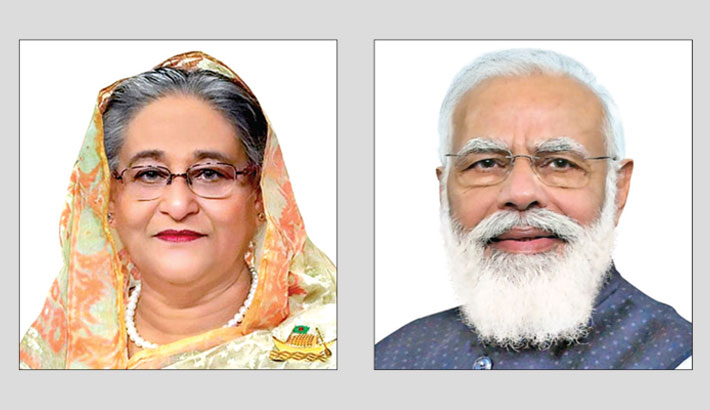 The relations between India and Bangladesh are firmly grounded on the shared pains of 1971. Bangladesh humbly remembers the supreme sacrifices made by the Indian soldiers on the soil of Bangladesh during the 1971 war of liberation, and the other supports we received from the people and government of India.

Bangabandhu reflected this sentiment on February 6, 1972 on his maiden state visit to India, while speaking to the huge crowd at the Brigade Parade Ground in Kolkata. Professing that the Bangladesh-India friendship would exist forever, Bangabandhu said, “…the Indian people and the Indian government came forward (to support Bangladesh during the war of liberation). So did the Indian army and our brothers from West Bengal, Tripura, Meghalaya, and Assam. I thank you on behalf of 75 million people of Bangladesh.” (A. H. Khan (edited), ‘Jatir Pita Bangabandhur Nirbachito Bhashon (Selected Speeches of Father of the Nation Bangabandhu)’, Volume 02, page 169, Ekattor Prokashoni, 2011).

The friendship between the two neighbors has grown stronger with time as we share the same cultural heritage and history. Bilateral relations are at a new height now given the

deep political and strategic understanding between the heads of the two friendly governments.

There is huge enthusiasm in Bangladesh in welcoming South Asian heads of state and governments including Mr. Narendra Modi, the Indian Premier, in the celebrations of the birth centenary of Bangabandhu and golden jubilee of the independence of Bangladesh. This will further heighten both regional and bilateral relations between the neighbors. Together we aspire to build a prosperous South Asia learning from each other’s success stories of fighting against the common enemy i.e. poverty.

It is very heartening to see that the Bangladesh Premier Sheikh Hasina, like Bangabandhu, is eager to harness the maximum benefits of the India-Bangladesh friendship. On 09 March 2021, she said, “Political boundaries should not become physical barriers to trade (between Bangladesh and India)” (UNB News, 09 March 2021).

She further said, “We are creating a new era in South Asia providing connectivity to India. We are in a region which has remained conservative in opening up and where inter-regional trade is far below potential”. She said all this while virtually inaugurating the Maitree Setu (Friendship Bridge) over Feni River along with her Indian counterpart Prime Minister Narendra Modi. At that auspicious moment, Prime Minister Modi said that the bridge was expected to herald a new chapter in India-Bangladesh ties. He said, “Connectivity is not only strengthening friendship between India and Bangladesh, but also proving to be a strong link of business.” (The Daily Sun, 10 March 2021).

These messages from the two premiers clearly indicate that collaboration for trade facilitation is the main facet of Indo-Bangladesh friendship. Indeed, over the last decade or so government and non-government actors in both countries have strived to ensure maximum utilization of bilateral trade potential. We at the research institute Unnayan Shamannay have been deeply involved in collaborative research and related policy advocacies with CUTS International from India to promote the case for closer connectivity in the BBIN sub-region in general, and Bangladesh and India in particular. We have also been working with other non-governmental research institutes in India (Meghalaya), Bhutan, and Nepal.

Bangladesh and India have worked together for a long time to improve trade. The driving factors behind these efforts are aspirations of re-integrating the economies of a geographically integrated region with many complementarities, political aims to develop the borders as access points for integrated development, and ambitions to encourage optimal utilization of the demographic dividends in the region. These two countries and their South Asian neighbors can learn from the experience of ASEAN countries in trade collaboration. The ASEAN model was initiated through reduction in intra-regional tariffs and later moved on to enhancing connectivity (ASEAN Highway network, ASEAN open skies). As the ASEAN collaboration model matured, advanced ideas such as business incubation and telecommunication network and ASEAN power grid started to be realized. Commendably, Bangladesh and India have been replicating the ASEAN model of trade collaboration (of course, with due contextualization). And these two countries have been significantly successful in bringing two other neighboring countries, Bhutan and Nepal, into this trade facilitation discourse.

The Bangladesh-Bhutan-India-Nepal Motor Vehicle Agreement (BBIN-MVA) signed on 15 June 2015 permits member states to ply their vehicles across the sub-region for transportation and passengers. While utilization of full potential of the said agreement is still subject to upgradation of the facilities and regulation, it is a big leap in the right direction. Stakeholders are rightly enthusiastic about its potential outcome. Also, the agreement between Bangladesh and India Protocol on Inland Water Transit and Trade (PIWT&T) is allowing transport and transit between India and Bangladesh via waterways. Studies have shown that if the inland waterways can be optimally utilized for trade between the two countries, then travel/transportation costs may be reduced by 30 percent. That, of course, will require further financial and technological investment focused on related infrastructures. The two governments are also working to rekindle railway connectivity. Out of the six existing but defunct railway links, five have already been revived and work is underway to operationalize the sixth along with two new links. Air connectivity between Dhaka and Guwahati has been revived. Soon, many other Bangladeshi cities such as Sylhet and Chattogram will be connected by air with smaller towns/cities in eastern and northeast India. It is really encouraging to see that the two governments are going beyond road connectivity and encompassing all means of transportation for goods and passenger transportation (Bipul Chatterjee, The Economic Times, 20 March 2021).

India and Bangladesh have already initiated energy cooperation. India is now exporting 660 MW to Bangladesh and another 500 MW power transfer from Baharampur to Kushtia has been inaugurated recently. Bangladesh can play the role of ‘power corridor’ to link Arunachal province of India with the rest of that country. In fact, energy trade enhancement may result in the creation of BBIN power market in the future. Energy cooperation between the two countries should be expanded towards incorporating renewable energy as well. While Bangladesh has had significant experience in providing household based solar power energy solutions including solar irrigation in remote areas, India has commendable experience in operating large scale renewable energy projects. Obviously these two countries can learn from each other’s experiences of innovative initiatives on renewable energy.

Improvement in connectivity as well as the visible political will to further improve it has had significant positive impact on the investment climate. Indian investment in Bangladesh is growing consistently. Total Indian investment proposals registered with Bangladesh Investment Development Authority (BIDA) is about USD 3 billion. These are to be invested in three Indian Special Economic Zones (SEZs) in Mongla, Bheramara, and Mirsarai. Yet, the true potential of bilateral trade is yet to be fully tapped. For example, Northeast India has a strong advantage in agricultural products. And those can be fed into the very vibrant food processing industry of Bangladesh. In turn, Northeast India again can serve as a market for the processed food from Bangladesh. Surely, India-Bangladesh economic cooperation has the power to change the economic landscape of Northeast India (Kathuria, Sanjay, “Bangladesh Corridor Vital to India’s ‘’Act East’ Policy”, The Hindustan Times, September 27, 2017). The point to be noted, however, is that reduction of tariff and non-tariff barriers and ensuring efficiency of the customs system are pre-requisites for success of this model. Digital Connectivity is also becoming equally important in bringing in people of both countries through the availability of broadband. Tripura is already accessing the benefits such digital connectivity from Bangladesh.

Using digital connectivity, both countries can remove barriers to services trade which are much greater than that of goods. This will help make growth more inclusive, enhancing the participation of small and medium entrepreneurs including women. A cooperative approach between the two countries in promoting services trade could lead to an explosion of digital services, as most businesses are transforming themselves digitally during the pandemic. For that matter, the regulators of the two countries or of the sub-region should sit down and iron out regulatory standards and trading conditions to fast-track the processes of liberalizing services. I can confidently tell the readers as a former financial regulator that this is entirely possible if both countries commit to promoting businesses in the region. The digitization of trade and services across the border will also be a smart move towards eliminating to a great extent the threat of climate change by enhancing opportunities for green businesses.

As we have already demonstrated, collaborations and/or facilitations need not always be very big. Smaller initiatives can also yield very positive results especially when people-to-people connectivity is of concern. For example, four ‘border haats’ are currently operational (in Sunamganj, Kurigram, Chhagalnaiya, and Kashba). The central banks of both countries played strategic role in streamlining the foreign exchange regulatory requirements to ease small trading in these border haats. Indeed, the countries need to learn from their experiences and work to improve on them. This small initiative of formalizing trade across the border has improved people-to-people cooperation and reduced the threat of insecurity arising out of informal trade, including that of drugs and guns. Both countries are now working on increasing the number of such border haats considering these results. Surely, this experience has the potential of transforming the entire border to a friendly special economic zone with win-win outcomes.

While there has been commendable progress in trade collaboration and bilateral trade between India and Bangladesh, much remains to be done. Bangladesh’s trade with India accounts for only 10 percent of Bangladesh’s total trade. The ratio is even smaller for India (only 1 percent). This appears to be especially miniscule when one compares these ratios with those of East Asian countries (50 percent of total trade). A recent World Bank report has shown that Bangladesh’s export to India could increase by almost 182 percent, and India’s export to Bangladesh by 126 percent. These ratios could further increase if connectivity improved. Then Bangladesh’s export to India could increase by 297 percent, and India’s export to Bangladesh could increase by 172 percent. The figures may appear staggering. But if one looks further into the benefits of increased connectivity then s/he can easily understand the extent to which trade could be enhanced through enhancement of connectivity. For example, in the absence of corridor/transit facilities a Northeast Indian trader must travel 1,600 km from Agartala to Kolkata (via Siliguri). But if s/he could travel via Bangladesh, then the distance would be less than 600 km. This distance could be even further reduced if that trader could access the Chittagong port (only 200 km from Agartala). Things are moving in that direction, but we must focus more on removing logistics bottlenecks and connecting local markets to regional corridors.

Improving connectivity to enhance trade can be a real ‘win-win’ for both Bangladesh and India. A recent World Bank report titled “Connecting to Thrive: Challenges and Opportunities of Transport Integration in Eastern South Asia” has inferred that seamless connectivity between the two countries could increase Bangladesh’s national income by 17 percent and India’s by 8 percent.

There are three driving forces in favor of further trade collaboration between India and Bangladesh. Firstly, the countries are enjoying unprecedented levels of political will of cooperation leading to significant easing of visa arrangements for both tourism and health services. The cultural and educational exchanges are also improving at a fast pace. Secondly, Bangladesh is the most vibrant economy in South Asia and India is the largest; both can enhance their income via enhanced connectivity and trade. Finally, in the post-pandemic world when all global powers are re-thinking their value chains, Bangladesh, India and their near neighbors must also think about further enhancing sub-regional cooperation. Beyond trade, both countries have demonstrated extraordinary mutual support during the pandemic by sharing PPEs and vaccines. India’s whole-hearted support for making vaccines available to Bangladesh within such a short period of time will be remembered in the years to come. Long live India-Bangladesh Friendship.