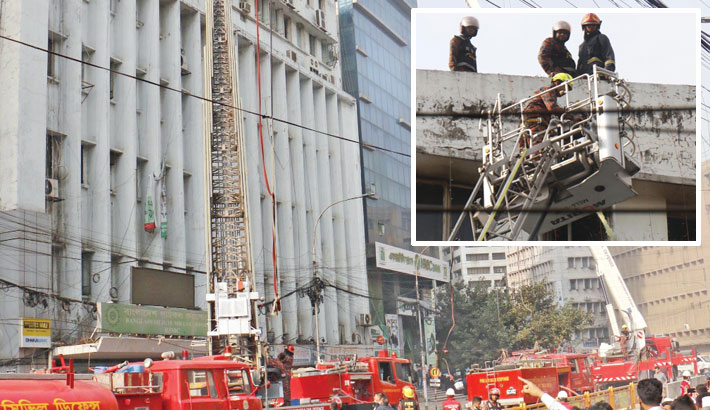 Firefighters use hydraulic ladders to hose water on Adamjee Court Building (inset) in the capital’s Motijheel area on Monday in an effort to douse the flame in the building while a huge crowd of onlookers surround the site. —SUN photo

A fire ripped through Adamjee Court Building in the capital’s Motijheel area on Monday.

On receiving information, 13 units of firefighters rushed to the spot and brought the blaze under control after struggling for two hours.

No casualty, however, was reported in the incident, but two firefighters – Rabbi and Shakhawat – were overcome by smoke and fumes. They were admitted to Dhaka Medical College and Hospital.

Lima Khanam, an officer of Fire Service and Civil Defence (FSCD) control room, told the Daily Sun that the eight-storey building caught fire at about 1:35 pm.

Mohammad Raihan, station officer of the FSCD headquarters, told the Daily Sun that the fire originated at the storehouse of Bangladesh Jute Mills Corporation (BJMC) on the sixth floor of the building.

“There were some jute products and papers in the storehouse. Besides, there was a daycare centre on the floor. The staff members and other people on the floor managed to come out safely,” he said.

The cause of the fire is not known yet, said Raihan, adding that they would form a committee to look into the fire incident.