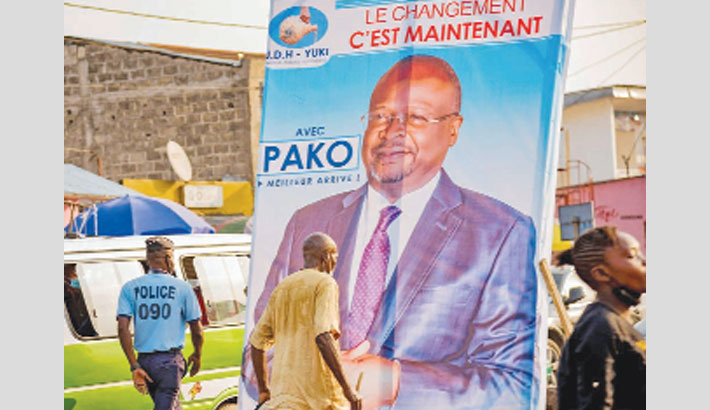 The leading opposition candidate in Congo-Brazzaville’s presidential election is in hospital with Covid-19 while voting is under way.

In a video circulating on social media, 61-year-old Guy Brice Parfait Kolelas is seen briefly removing an oxygen mask to tell his supporters that he is “fighting death”.

He urges them to vote in the election, reports BBC.

Kolelas, who is diabetic, is one of six candidates running against President Denis Sassou Nguesso. Family members have said they are trying to arrange for him to be evacuated to France for treatment.

Kolelas missed his final campaign event on Friday after saying a day earlier that he feared he had malaria, the Associated Press news agency reports.

He was admitted to a private hospital in the capital, Brazzaville, and it was later confirmed that he had Covid-19.

Speaking in French from his hospital bed, Kolelas said: “My dear compatriots, I am in trouble. I am fighting death. However, I ask you to stand up and vote for change. I would not have fought for nothing.”

Kolelas came second in the last election in 2016, obtaining only 15% of the vote compared with Mr Sassou Nguesso’s 60%.

Sassou Nguesso, 77, is widely seen as an authoritarian ruler who is expected to win again.

The watchdog group NetBlocks reported that the internet had been shut down ahead of Sunday’s voting.

The largest opposition party, the Pan-African Union for Social Democracy (UPADS), is boycotting the election, saying it fears the poll could divide the nation.

Congo-Brazzaville’s Catholic Church episcopal conference has said it has “serious reservations” about the election’s transparency.

Sassou Nguesso has been in power since 1979, except for a five-year period after losing elections in 1992.

Congo-Brazzavile has officially recorded more than 9,000 cases of Covid and 130 deaths.