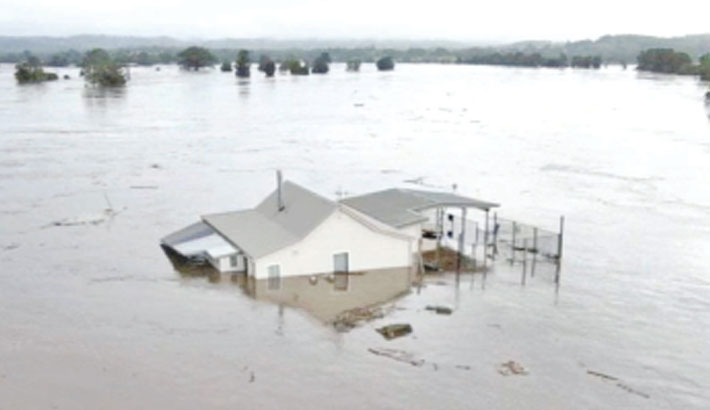 A young couple in Australia’s New South Wales state have seen their house swept away by flash floods on what should have been their wedding day.

Thousands more people in low-lying suburbs of Sydney have been told they may have to leave their homes. The city is seeing its worst flooding in decades as the downpour continues. Officials have warned of “life-threatening flash floods”,

with waters not expected to subside until Thursday.

Seven emergency shelters opened across the state as Premier Gladys Berejiklian said parts of the Mid-North Coast were experiencing a “one in 100-year event”.

Warragamba Dam, Sydney’s main water source, has been overflowing for the first time in years.

Sarah Soars and Joshua Edge had been renting the cottage at Mondrook, just north of Sydney, and had been due to get married on Saturday on the river banks in front of the property.

The couple, who have been together for nine years, are staying with family and were not in the house when it was swept away.

“It literally floated like a houseboat, the whole house, fully intact,” the co-owner of the property Peter Bowie was quoted as saying by Australian broadcaster ABC.

“It went so fast,” he added. “It went nearly a kilometre all intact, 100%. This house just lifted up and floated down the river.”

Hundreds of people have been gathering at emergency evacuation centres set up across the state. State emergencies officials said a number of schools in the affected areas would be closed on Monday. Residents were also asked to work from home.

Up to 100mm (four inches) of rain is forecast to fall in 12 hours over Sydney, and as much as 300mm for the lower Blue Mountains, west of the city.

Agata Imielska from the Bureau of Meteorology warned of localised intense rainfall and damaging winds, saying the public should be aware of “dangerous conditions” that could change quite quickly.

Some children took advantage of the rain to organise a mud slide in Newcastle.