There’ll be no sign of fake independence proclaimer: PM 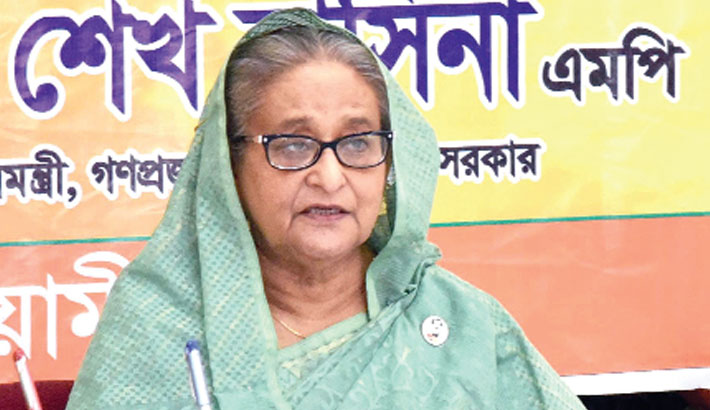 Noting the world leaders have recognised that Father of the Nation Bangabandhu Sheikh Mujibur Rahman had proclaimed Bangladesh’s independence, Prime Minister Sheikh Hasina on Sunday said there will be no sign of the fake proclaimer globally.

“Evil attempts were made to erase the name of the Father of the Nation from history, but no one could remove his name. There were also attempts to make a false proclaimer of independence and hero of the War of Liberation but no sign of this announcer will be found globally,” she said apparently referring to BNP founder Ziaur Rahman.

Sheikh Hasina, also Awami League president, said was addressing a discussion organised by her party at its Bangabandhu Avenue central office marking the 101st birth anniversary of the Father of the Nation and National Children Day.

The premier joined the programme virtually from her official residence Ganabhaban.

She said no one can remove Bangabandhu’s name from history as the world leaders are now publicising while resolutions are also being adopted worldwide that Bangabandhu proclaimed the country’s independence on March 26, 1971.

Sheikh Hasina said attempts were made to remove Bangabandhu’s name from history after his assassination along with most of his family members but no one can succeed by trying this right now. “We’ve got the opportunity to celebrate the golden jubilee of independence and the birth centenary of Bangabandhu as the country’s people voted us to power,” she said.

She said Bangabandhu gave Banglalees independence through a long struggle but he was killed brutally on the soil of the independent country.

She said a situation had been created after 1975 when no one had the courage to show freedom fighter identity. “Only those who flattered the then illegal government, which assumed power violating the constitution after the killing the Father of the Nation, had the scope of speaking,” she said.

Citing ongoing development activities, Sheikh Hasina said it is now proven that the country is moving ahead following the development path of Bangabandhu. “We’re doing what the Father of the Nation had shown us during his tenure spanning three and a half years. We’re moving ahead following his path as we’re trying to successfully implement the tasks he wanted to accomplish. The country’s people are reaping the fruits of that,” she said.

She said Bangabandhu had dreamt of building Bangladesh as a hunger -poverty- free country where people would have an improved life and that is why he had taken those development agendas.

The Prime Minister said Bangladesh has now achieved the status of a developing nation under this government graduating from the list of least developed countries (LDCs) following the Bangabanhdu-directed pathway leaving behind all the black chapters from 1975 to 1996 and 2001 to 2008. “The country will continue to march forward.”

“Bangladesh will move ahead as a developing nation and will be a developed one by 2041,” she said.

Sheikh Hasina said the Bangalees would not have emerged as an independent nation without the birth of Bangabandhu. “We would not have got respect in the world, a state and a flag had Bangabandhu not been born here,” she said.