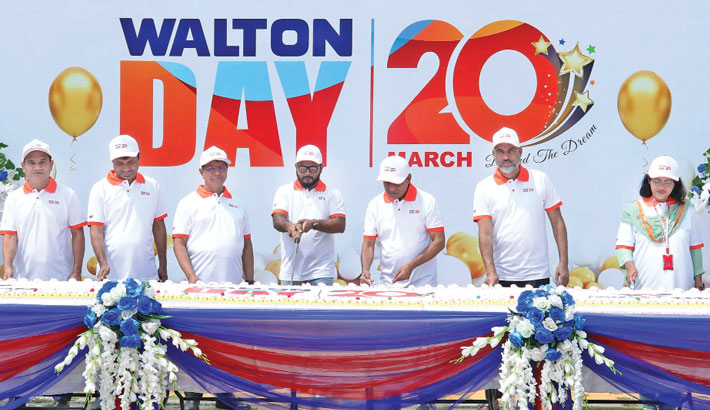 Walton organised a celebration programme titled ‘Walton Day’ and announced special benefits for customers to mark the inception of Walton’s journey in about two decades ago.

The programme was held at the company’s corporate office in the capital on Saturday, said a press release.

‘Digital Campaign Season-10’ was also announced on the occasion of Walton Day celebration.

Under the campaign’s new season, Walton has announced some special benefits like sure cash vouchers worth of crores of taka for fridge, free products and so many on the purchase of its fridge, air conditioner or AC, television, washing machine and ceiling fan.

Addressing the celebration programme, Golam Murshed said that after meeting the lion's portion of the domestic demands, Walton products are being exported to more than 40 countries. "Walton is now moving ahead with vision of becoming one of the top five global electronics brands by the 2030,"

he said, adding, "We believe that we will be able to reach the goal before that time with the cooperation of all."

As per the customers’ benefits announced under the camapign’s Season-10, a customer will get sure cash vouchers worth of maximum Tk 1 lakh on the purchase of Walton fridge as well as washing machine from any Walton Plaza or distributor outlet across the country.

In addition, sure cash back up to 200 percent were declared upon the purchase of Walton AC under the campaign’s Season-10.

On the purchase of Walton TV during this season, customers are offered free AC in each hour or sure cash back benefits.

Customers are also offered up to Tk 1 lakh cash on the purchase of Walton ceiling fan.