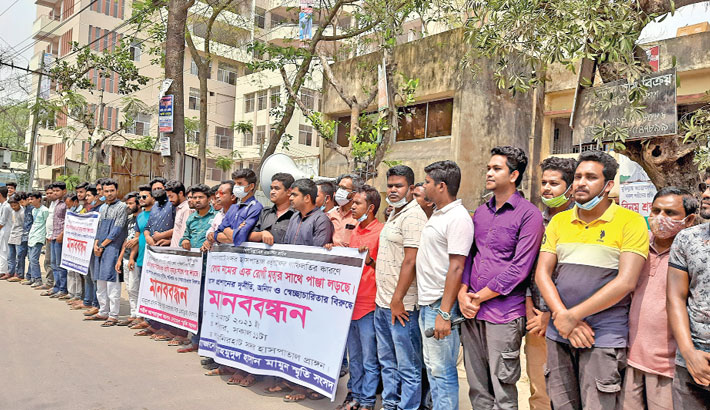 People from different social and cultural organisations of Lalmonirhat district town form a human chain in front of Sadar Hospital protesting wrong blood transfusion to a female patient of the hospital that turned her health condition critical. The Photo was taken on Saturday morning. — Sun Photo

LALMONIRHAT: Activists of different socio-cultural organisations of the district on Saturday formed a human chain in front of Sadar Hospital protesting irresponsibility and irregularities of hospital authorities.

Due to irresponsibility of the pathology department of the hospital a female patient has been battling for last five days with the death in the bed of the hospital.

The situation arose as the patient Rahima Begum, who is undergoing treatment at the gynecology department of Lalmonirhat Sadar Hospital, was given "B-positive" blood instead of "A-positive".

The shocking incident took place on March 15 at Lalmonirhat Sadar Hospital. Such incident triggered uproar in the district. Following the incident Mahmudul Hasan Mamun Sriti Sangsad along with three more social organisations formed the human chain with the participation of relatives of a patient and local people.

They blamed Jahidul Islam, in-charge of the pathology department, for the incident and demanded punishment for all those involved in the incident.

They also slammed hospital authorities as it did not take any action against the culprits in the last four days.