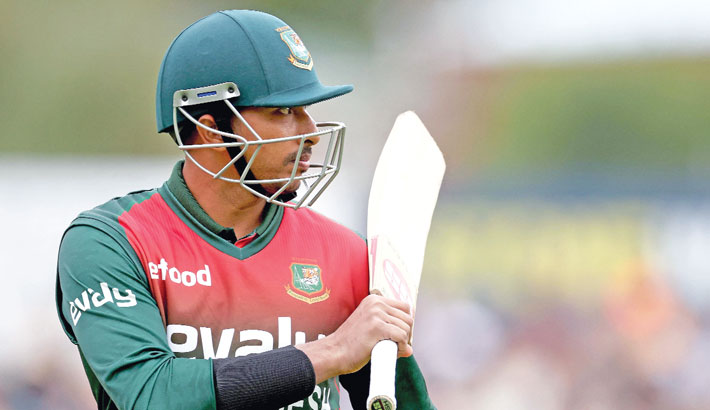 Soumya Sarkar continues to walk in the corridor of uncertainty. The left-handed batsman continuously is being pushed by the team management to switch his roles that hardly is proving dividend in the end.

After completing nearly seven years in international cricket when someone is not sure of his batting position it only indicates the vulnerable state of the dressing room.

After the three-match series opener against New Zealand where Soumya came at three following batting at number seven in the previous series, one can easily claim his situation as the new test case of Bangladesh cricket.

ODI skipper Tamim Iqbal explained the reason for promoting Soumya against New Zealand at Universal Oval where he failed to open his account and if his statements are to be believed, Soumya is likely to play the remaining matches at the same position.

“Yes, we did say that we are considering Soumya (Sarkar) to bat at number 7. If you look at our team combination today (Saturday), you can see that we did not have a sixth bowler. (Mahmudullah) Riyad Bhai can’t bowl due to his back injury. He might not be able to bowl the entire series for this issue. So, in that case, Soumya was our only option as the sixth bowler,” said Tamim after Bangladesh lost the opening game by eight wickets.

“And Soumya was the well-suited number-three batsman considering the team combination that we played today. Also as he previously played at number three and also has experience playing New Zealand so we had to make him bat at three.

“Secondly, if anyone played badly from the regular five bowlers that we played and then we had to rely on a sixth bowler and Soumya was our only available number-six bowler,” he added.

It was a complete U-Turn from his previous position when he stated that Soumya was informed four to five months back that he would bat at number seven, keeping the 2023 ICC World Cup in India in mind.

The decision to demote Soumya at seven during the three-match ODI series at home against West Indies sparked quite a few eyebrows considering he had not played in that role and was seen only twice before the home series.

Tamim actually came at head coach Russell Domingo’s rescue, who proposed the move of demoting the left-handed batsmen down the order, but no proof can justify his statement.

“The coach gave a hint yesterday of players’ designated positions of playing. He (Soumya) was informed about this about four to five months ago. It's a place where we haven't got a suitable batsman yet if you look at the last four to five years,” Tamim said after Domingo announced that Soumya will bat at seven against West Indies.

Now the obvious question came if Tamim had informed Soumya that he will play at seven than how did he play as an opener in both the BCB President’s Cup and Bangabandhu T20 cup considering the left-handed batsman should have been preparing at seven in those tournaments more so because it was organised by Bangladesh Cricket Board as part of their resumption plan.

Bangladesh team management went on to have Soumya as back-up after he lost his regular place as an opener around 2018 and he was even flown to Dubai in the middle of their 2018 Asia Cup campaign as a middle-order batsman.

Since then they kept on experimenting with him and even went to an extent that he was given the role of a finisher in T20Is.

“At the moment I think the top-order is pretty established with Tamim (Iqbal) and Liton (Das) opening the batting. We want to maybe have a look at Soumya in the middle-order. We are trying to find someone that can be a power hitter in the back-end of our innings and maybe bowl a few overs,” Domingo stated while demoting Soumya at seven against West Indies where he got only one chance to bat in the three-match series.

“I know Soumya has always played at the top of the innings. We need to try to find guys who can fit into these roles as the season goes on. By the time we get the World Cup, everybody has played various roles and then we can finalize what is our best line-up,” he added.

It did not take long for Domingo to change his stance, who decided to demote Shakib Al Hasan down the order, the most successful averaged player of Bangladesh at number three, to bring depth in the middle-order.

Domingo said that he is ready to give Najmul Hossain, who failed to deliver against the West Indies at three, a fair bit of run but now with Soumya at three that looks a slim reality.

Soumya had proven him at the top and his ability to use the pace seemed to have worked well before his form went down due to his problem outside the off-stump which is yet to be sorted.

Whether he will suit that position or will be demoted again is still dubious but team management quickly need to fix their mind regarding him rather than making him an object for experimentation in their laboratory.