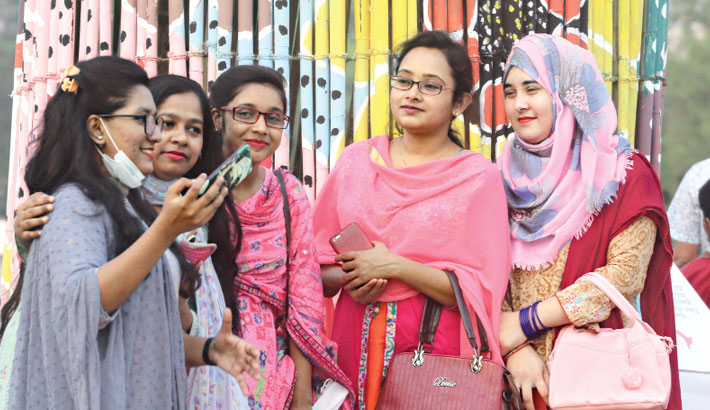 The number of book lovers at the Amar Ekushey Book Fair is increasing day by day to buy the latest books from their favourite writers.

On the third day of the fair on Saturday, people of all ages were seen visiting the fair. As it was weekend, the fair premises were full of book lovers. Book lovers of different strata were seen coming to the fair and buying books of their favorite authors. The fair which was postponed during its traditional month of February due to Covid-19 pandemic, began on Thursday.

Iftekhar Alam, a reader said, "The fair has just started. Today, I visited the fair premises with my wife. I also bought some books and expect to come again next Friday."

Expressing his satisfaction over the sales of last two days, a sales representative of Gyanakush Publication said, "The crowds of readers has increased due to the weekend being yesterday and today. Sales are also going well."

In this regard, a reader named Shyamoli Akhtar said, "Today is the third day of the fair. It's been two vacations, but fair is not fully prepared yet. Even the big publications have not been sorted out yet which is not expected at all."

When contacted, director of the Bangla Academy and member secretary of the fair management committee Dr Jalal Ahmed said, "Work is being going on swiftly to complete the work in time. Hopefully, everything will be fixed very soon."

Barrister M Amir-ul Islam presided over the programme while Abul Kashem and Abdul Mannan were present there.

The fair will remain open from 3:00pm to 9:00pm from Sundays to Thursdays and from 11:00am to 9:00pm on Fridays and Saturdays, with an hour break for lunch and prayers, until April 14.