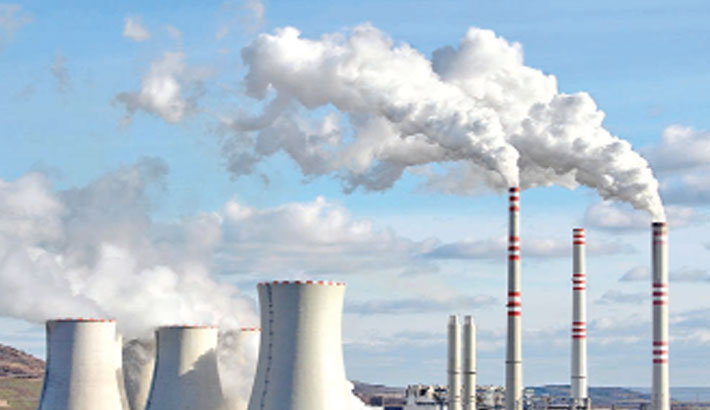 Britain’s carbon dioxide emissions have halved from their 1990 level, taking the country half-way to its net-zero 2050 commitment, a study indicated on Thursday, reports AFP.

Carbon Brief said the 51 percent drop, which has largely been driven by a move away from coal for power generation, was hastened by a record 11 percent drop in greenhouse gas emissions in 2020.

Oil consumption plummeted last year as lockdown measures were introduced to help tackle the coronavirus pandemic, the industry think-tank said in its study.

But it warned that emissions are expected to rebound when stay-at-home measures are lifted, and the economy restarts.

“The nature of the decline in 2020 shows how challenging it will be for the UK to eliminate its remaining (CO2) emissions,” it added.

“It also illustrates the progress made so far, ahead of the UK hosting the COP26 UN climate summit in November.”

The study said that in 1990, when then prime minister Margaret Thatcher resigned after 11 years in power, UK greenhouse gas emissions were at 794 million tonnes of CO2 equivalent.

That has been taken as the baseline for the country’s climate goals, including its pledge to the Paris Agreement.

The study points out that despite Thatcher’s controversial coal mine closures in the 1980s which led to a year-long miners strike, coal still accounted for two-thirds of electricity in 1990.

The power sector was the largest emitter at that time.

Gas had not yet transformed the market while renewables accounted for only 2.0 percent of the energy mix, most of it from hydroelectric power.

Industry was also still releasing nitrous oxide and methane, and other greenhouse gases.

By 2019, CO2 emissions had plunged 45 percent below the 1990 level, even as economic activity increased by almost 80 percent.

The fall was attributed to a cut in the use of coal in electricity production, cleaner industrial processes reducing toxic emissions, and a less-polluting hydrocarbon industry.

The study said progress has been much slower on heating gas, which in 2019 accounted for a fifth of Britain’s greenhouse gas emissions, despite better insulation and water heaters.

Transport accounted for more than a quarter of CO2 emissions—the most for any sector.

Since it took over the presidency, he said commitments to do so had grown from about a quarter of the world’s economy to 70 percent.

“That’s promising but we need more countries to pick up the baton,” he added.