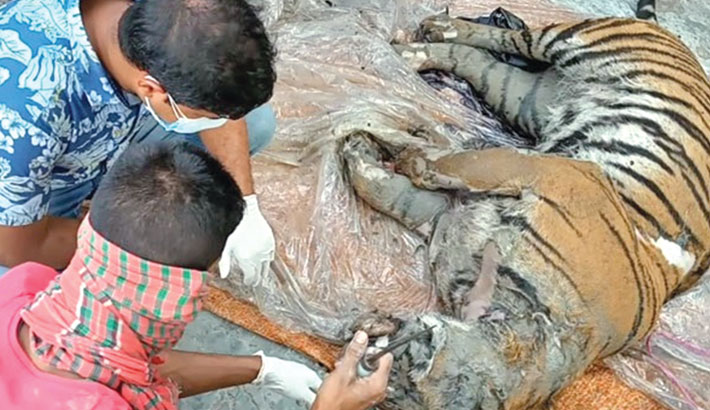 Forest guards collect viscera samples from the body of a dead tigress which was recovered from the Sundarbans on Friday night. The photo was taken from Sharankhola Range office of the forest on Saturday. —sun Photo

The Forest Department recovered a body of a Royal Bengal Tiger from the Sundarbans on Friday night.

The forest department said it is an adult tigress aged 14-15 years. The livestock department has collected various parts of the body to find out the cause of the death of the tiger.

Joynal Abedin, assistant forest conservator of the Sharankhola Range in the eastern part of the Sundarbans, said forest guards discovered the body of a tiger during a regular patrol on Friday evening.

The body was recovered at 10:00 pm and taken to the Sharankhola Range office.

“We initially thought it was a natural death due to old age as there were no signs of injury on the body” he added.

Morelganj Upazila Livestock Officer GM Abdul Quddus said, “We suspected that the tiger died seven to eight days ago. It was not possible to collect all the organs for autopsy as most of the body parts were rotten.”

“The tiger has been buried by collecting the kind of samples needed to find out the cause of death. The cause of death of the animal will be known in the examination” he added.

Earlier, on August 20, 2019, the Forest Department recovered a dead tiger from the Chaprakhali forest in the Sharankhola Range of the Sundarbans.

On February 3, 2020, the Forest Department rescued another dead tiger from the char of the Kobirkhali canal adjacent to the Kokilmoni patrol outpost of the same range.