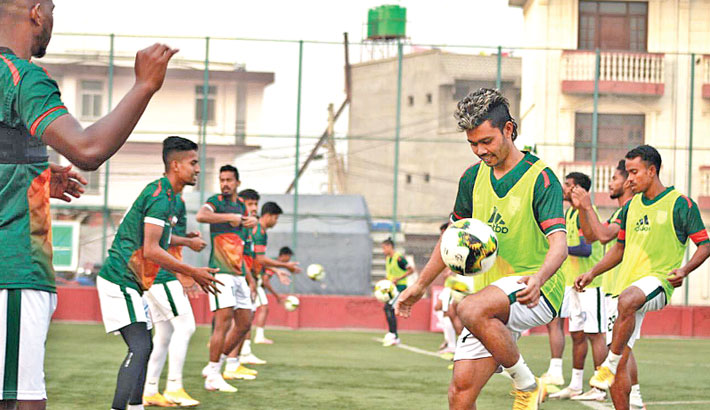 Players of Bangladesh national football team are seen during a training session at the All Nepal Football Association ground in Kathmandu, Nepal on Friday. —BFF PHOTO

Goalkeeping coach Les Cleevely joined the team on the same day as all the players and staff tested corona negative. The goalkeeping coach, who reached Nepal Friday morning, was also found negative during the test.

Bangladesh team earlier reached Kathmandu on Thursday and all the members of the contingent gave their samples for COVID-19 tests.

Bangladeshi footballers did an hour-long gym and swimming sessions under the head coach Jamie Day at the hotel in the morning. Later in the afternoon, the team worked on ball possession during their on-field session at the All Nepal Football Association ground.

“All of us have tested COVID-19 negative. We did a gym and training today. Goalkeeping coach Les joined today. We now have a full coaching staff. Hopefully, we will be able to take better preparations for the tournament,” said Zico.

Assistant coach Stuart Watkiss said, “We solved some problems in possession sessions. Later Jamie did some eleven vs eleven work for getting ready for the first game of the tournament. Nice to see that they (players) are improving, hopefully, they will carry it.”

Bangladesh will play two games against Kyrgyzstan U-23s and hosts Nepal on March 23 and 27 respectively while the final will be held on March 29, all at the Dasharath Stadium in Kathmandu. The matches will start at 05:45pm (BST).

Both Jamal and Rahmat Mia, who could not accompany the team after testing corona positive, will do Covid-19 tests today and will fly to Nepal on Monday only after they came out negative.