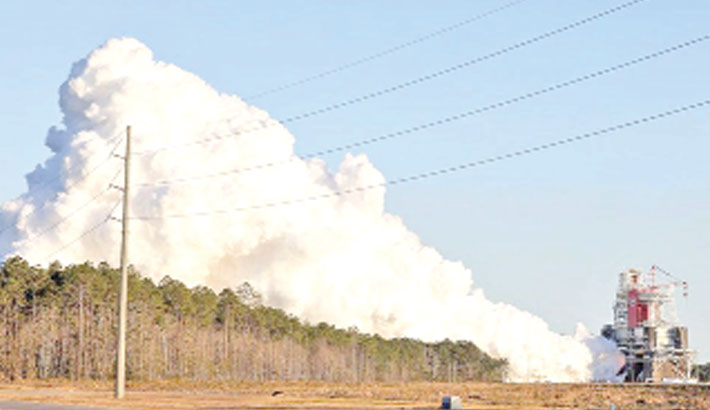 Nasa has carried out a successful test on part of the most powerful rocket in existence - the Space Launch System (SLS).

Engines on the rocket's "core stage" were kept running for more than eight minutes - simulating the time it takes the SLS to go from the ground to space, reports BBC.

It's the second such test for the biggest segment of the SLS, after an attempt in January shut down early. The SLS is to send humans to the lunar surface for the first time since 1972. The mission is part of Nasa's Artemis project, launched by the Trump administration in 2017.

The launcher consists of the orange core, with its four powerful RS-25 engines, and two boosters attached to the sides.

The test at Stennis Space Center, near Bay St Louis, Mississippi, began at 16:37 ET (20:37 GMT). The core was attached to a giant structure called the B-2 test stand.

A massive plume of exhaust expanded from the stand as the engines shook the ground. The cloud was so enormous, it was spotted from space by the Goes-16 satellite.

Although the target was to fire the engines for eight minutes, teams from Nasa and prime contractor Boeing only had to keep them on for 250 seconds (four minutes) in order to gather all the engineering data they needed.

"It was a great day and a great test," said acting Nasa administrator Steve Jurczyk.

The chair of the US House Committee on Science, Space and Technology congratulated Nasa on the successful test. Texas democrat Eddie Bernice Johnson said: "Achieving this significant milestone is a story of tenacity and dedication."

She added: "Today's successful test brings us one step closer to returning American astronauts to the Moon in preparation for the human exploration of Mars."

The core that was part of Thursday's test will be used for the maiden flight of the SLS - currently scheduled for late 2021.

In the 1960s, the stand tested engines used in the massive Saturn V rocket that launched the Apollo astronauts to the Moon.

John Shannon, Boeing's vice president and program manager for the SLS, told me before the first hotfire attempt: "When the engines start and then throttle up, we will do what's called a gimbal profile at 60 seconds. The engine nozzles move in a pre-programmed set of movements."

This gimbal movement of the nozzles allows the rocket to be steered during flight.

"This is the most heavily instrumented vehicle we will ever fly so we will get a tremendous amount of engineering data on vibration and temperature and stress, acoustics," said Mr Shannon.

Before Thursday's hotfire, engineers filled the core stage with more than 700,000 gallons (2.6 million litres) of propellant.

That propellant consisted of liquid hydrogen, which is the rocket's fuel, and liquid oxygen, which helps the fuel burn. They react explosively inside the engines, generating super-heated water vapour from the exhaust.

When they're fed to the engines, the propellants are at more than two hundred degrees below zero (F), but the exhaust that emerges is 6,000F (3,316C) - hot enough to boil iron.

This was done to protect the core stage from vibrations while it is anchored to the stand.

The RS-25s, built by California-based Aerojet Rocketdyne, are the same ones that powered the space shuttle.

The engines tested on Thursday contributed to 21 successful shuttle flights over the vehicle's 30-year operational history.

Two were used on the last space shuttle mission, STS-135 in 2011. One flew on the 1998 mission that launched the oldest person ever to go to space - US senator and Project Mercury astronaut John Glenn, who was 77 at the time. The other was used on one of the flights to service the Hubble Space Telescope.

The engines were refurbished following shuttle missions, but they will be discarded after the maiden flight of the SLS later this year.

That mission, called Artemis-1, will send Nasa's next-generation crew vehicle, Orion, around the Moon to thoroughly test its systems.

Tom Whitmeyer, from Exploration Systems Development at Nasa, said it would take about a month to refurbish the core stage, after which it would be put on a ship to Kennedy Space Center in Florida to prepare it for launch.

Here, it will be installed on a structure called the mobile launcher between the two booster rockets, completing the SLS vehicle.