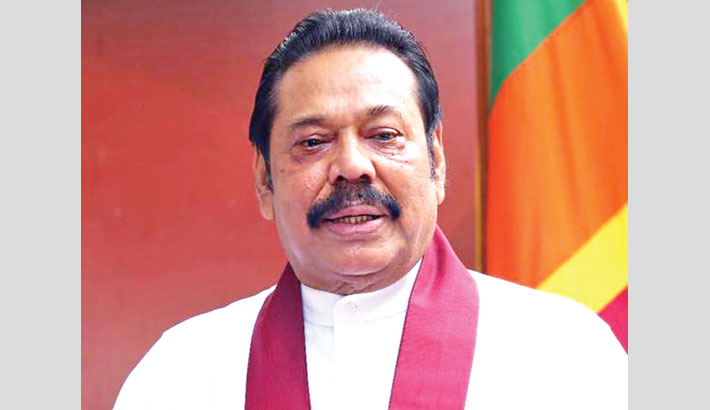 The Sri Lankan Premier made the remarks while addressing the third-day function ‘Jotokal Robe Padma, Jamuna’ of the 10-day gala programme titled ‘Eternal Mujib’ to celebrate the birth centenary of Father of the Nation Bangabandhu Sheikh Mujibur Rahman and the

Golden Jubilee of Bangladesh’s independence as the guest of honour at the National Parade Ground in the afternoon.

Mahinda Rajapaksa is the second international leader to attend the programme physically and extend his heartfelt compliments and sincere and warm wishes to Prime Minister Sheikh Hasina, her government, and the people of Bangladesh.

He said he joined the celebrations despite the COVID-19 challenges to express solidarity on behalf of the people of Sri Lanka.

“Our objectives of economic transformation, eradication of poverty and achieving the Sustainable Development Goals remain key priorities in the middle of great challenges,” Rajapaksa said.

“In the 21st century, with the great aspirations for Asian prosperity, our new generations need to be aware of the countless sacrifices made by their forefathers to achieve freedom,” he added.

He also said, “Many scholars believe that the first migrations from Bengal arrived in Sri Lanka through maritime routes as far back as 2,500 years ago.”

“It is also believed that Sri Lanka and Bangladesh had vibrant trade exchanges since 6th Century BC,” Rajapaksa said, adding: “Quite naturally, Sri Lanka was one of the first countries to establish diplomatic relations with the new nation of the People’s Republic of Bangladesh in 1971.”

Paying tribute to the Father of the Nation, the Sri Lankan Prime Minister said, “Bangabandhu Sheikh Mujibur Rahman was a person of principles who dedicated his entire life to the Bangalee people, their language and their wellbeing.”

“He was determined to continue his freedom struggle until the creation of a new nation of Bangladesh in 1971. Unfortunately he couldn’t live to realise the dreams he nurtured for his beloved country,” he said.

He said he understands the agony of the immense loss that occurred on August 15, 1975.

“On that day, the nation lost a hero and the Father of Independence. At the same time, a beloved daughter lost her parents and siblings,” Rajapaksa said.

Addressing his counterpart Sheikh Hasina, the Sri Lankan Prime Minister said, “Despite huge setbacks, Bangladesh continues to flourish under your able leadership -- that’s the best honour in the name of your esteemed father.”

The programme began with the chorus presentation of Bangladesh’s national anthem.

The recitation from the holy religious books, Mujib Year theme song, an audio visual presentation on the theme of the programme ‘As long as the Padma, Jamuna flow on’ and a recorded video of Bangladesh Air Force’s fly past were presented.

A video message sent by Russian Foreign Minister Sergey Lavrov was screened on the occasion.

He said, “Russia remembers Sheikh Mujibur Rahman as an outstanding political figure and a devoted fighter for the freedom and happiness for his people and a true friend of our country.”

“We welcome the considerable success made by the people’s republic of Bangladesh over the years of its independence,” he added.

Later, Prime Minister Sheikh Hasina delivered her speech as the chairperson of the programme.