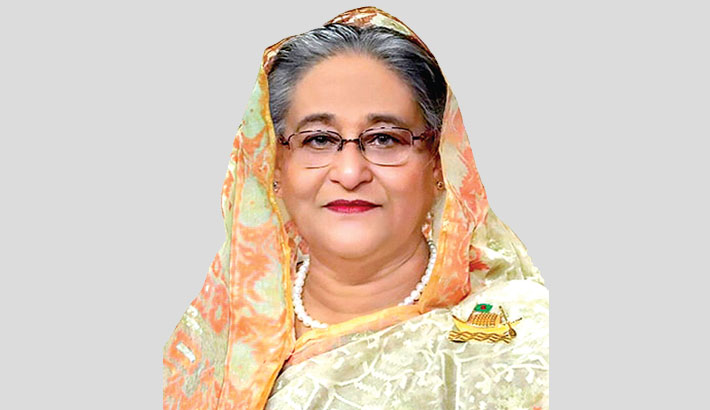 Prime Minister Sheikh Hasina on Friday urged all to make a vow to build Bangladesh as ‘Sonar Bangla’ as dreamt by Father of the Nation Bangabandhu Sheikh Mujibur Rahman.

“Let Bangladesh be built as a developed and prosperous Golden Bangla where no one will live with hunger and remain homeless. Every house will be lit up,” she said.

The Prime Minister was addressing the third-day event of the 10-day ongoing special programmes at the National Parade Ground in the capital to celebrate the golden jubilee of the country’s independence and Bangabandhu’s birth centenary.

She said the Father of the Nation had a desire that the country’s people would get a standard lifestyle along with education, healthcare services and employment. “Let’s make an oath to materialise the dream of the Father of the Nation on the occasion of his 101st birth anniversary and the golden jubilee of independence,” she said, adding that Bangladesh will remain as a non-communal country.

Extending her gratitude to Sri Lankan Prime Minister Mahinda Rajapaksa for attending the celebrations, the premier said the cordial relations between Bangladesh and Sri Lanka will be strengthened further in future.

“Sri Lanka is our close friend. Bangladesh and Sri Lanka share similar positions on various regional and international issues while both the countries used to cooperate and support each other’s causes. This cordial relationship between the people of our two countries will be stronger and stronger in future,” she said.

Sri Lankan Prime Minister Mahinda Rajapaksa, who arrived in Dhaka on a two-day visit, graced the occasion as the guest of honour.

Sheikh Hasina said the Sri Lankan Prime Minister is a true friend of Bangladesh and he has always stood by it. “Prime Minister Mahinda Rajapaksa’s participation in the celebrations of the birth centenary of the Father of the Nation and the golden jubilee of independence is the testimony of his as well as the Sri Lankan people’s heartiest feelings,” she said.

Paying homage to Bangabandhu and the Liberation War martyrs, the premier said March is the memorable month for the Bangalee nation.

The Father of the Nation was born on March 17, 1920 in Tungipara of Gopalganj, who brought an independent and sovereign homeland to the Bangalee nation which had been in chains of oppression for thousands of years, she said.

She said the fearless Bangalees followed his instructions word by word and liberated the country through a nine-month war. “The final victory was achieved on December 16, 1971.”

After nine months of inhuman torture in Pakistani prison, Father of the Nation returned to independent Bangladesh on January 10, 1972, she said.

“His physical condition had deteriorated due to the torture and unhealthy atmosphere of the Pakistani prison. Back then, he needed treatment and rest. But he was not a man to care for himself. He was rather one who prioritised the people of the country first and last. He jumped into the mission of building the country without taking time,” she said.

“In just 10 months, he presented the nation with one of the most progressive constitutions in the world. During the three and a half years of his government, he revived the economy by restoring the war-ravaged infrastructure, roads, bridges, culverts, railways and ports. In 1975, the GDP growth rate exceeded 7 percent. Under his leadership, Bangladesh gained recognition from 116 countries and membership of 27 international organisations,” Hasina added.

She said Bangabandhu did not just struggle for the liberation of the people of Bangladesh but he dreamed that all the oppressed and deprived people of the world would be freed. “He was a trusted soul in regional cooperation,” she said, adding that her government has been working relentlessly to establish a hunger -and- poverty-free non-communal Golden Bangla as dreamt of by the Father of the Nation.