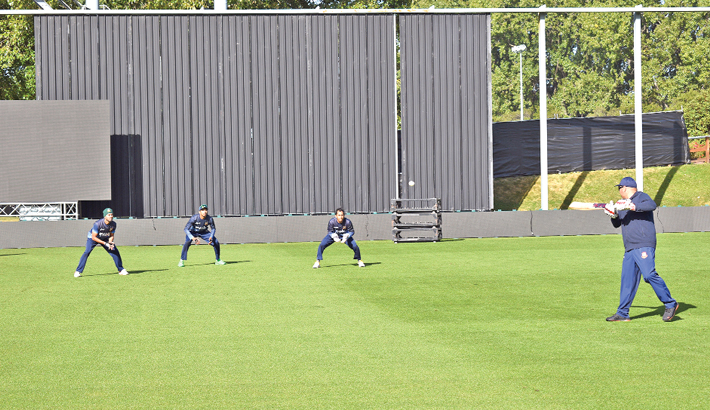 Bangladesh cricketers are seen during a catching drill session at Dunedin in New Zealand on Thursday. — BCB PHOTO

Bangladesh can heave a sigh of relief as their ODI skipper Tamim Iqbal on Thursday expressed his optimism to take part in the opening match of the three-match ODI series against New Zealand, scheduled on Saturday in Dunedin after recovering from a hamstring injury.

“I am hopeful to play the opening game. I have practised today (Thursday) and will be practising tomorrow (Friday) and I am in good shape following the hamstring injury,” Tamim told reporters in a zoom press conference.

Tamim earlier missed the lone intra-squad match at Queenstown on Tuesday as he was having discomfort for a hamstring injury despite his MRI report suggesting there was nothing serious in it.

Bangladesh team arrived at Dunedin following their five-day training camp at Queenstown on Wednesday and started their preparation on Thursday ahead of the opening game at the University Oval ground.

Tamim was also hopeful of doing well in the ODI series as he felt that their pace bowling department looked in a much better position and they have got the best possible preparation ahead of the series.

“Firstly I think the pace bowlers are in good shape and now they have to execute. Secondly, all the team members are having the faith to do well,” said Tamim.

“We have got the best possible preparation ahead of the series and now it’s time for us to deliver in the middle,” he said adding that he wants to play with five genuine bowlers in New Zealand.

“The first 10-15 overs in New Zealand conditions are the most crucial time of the match. So struggling in the crease or even losing a few wickets are quite natural during this period as the new ball swings quite a lot during these overs. So every other team in the world faces identical problems when they tour New Zealand,” he said.

“Mustafiz is a bit reserved, he eventually has to move out of it as he doesn’t need to be vocal in the media but he must be communicative within the team as much as possible as he is currently the best pacer around for us. So it will be better for us to utilise his experience and tips within the others.

“He has represented himself in various franchise leagues, playing in the national team for quite a long time and he does share his experience with the other bowlers.

“We will play with three pace bowlers along with an all-rounder. In New Zealand we have to play with five genuine bowlers because it can be difficult at times if you are playing with four bowlers,” he added.

Tamim added that if Soumya Sarkar makes it to the XI, he will play at the top.

The announcement was very much contradictory as the team management and Tamim insisted that they want Soumya to play the role of the finisher during their last home series against West Indies and Soumya batted at lower middle-order in the last game as well.