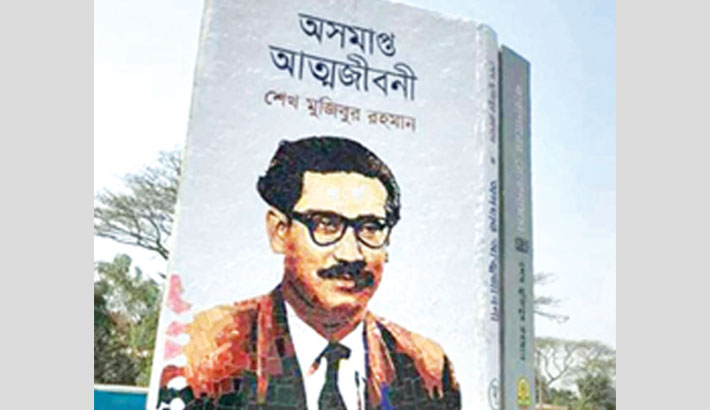 Oshomapto Atmojiboni by the Father of the Nation Bangabondhu Sheikh Mujibur Rahman is an autobiography dealing with memoirs of his eventful life from his birth till 1954 which was penned during his life in jail throughout the period 1967-69. In the preface to the book Prime Minister Sheikh Hasina wrote that these memoirs came to her possession after 39 years of the tragic assassination of her father.  These memoirs were written down in a number of notebooks which were luckily saved by Fazilatunesa Mujib among other manuscripts and papers. After Bangabondhu was arrested on the black night of 25th March, 1971, these notebooks remained piled among other papers at his Dhanmondi house. The Pakistani forces deemed them to be rubbish papers and hence did not destroy them during the occupancy of the house. Hence, these notebooks became priceless pieces of memoirs like Anne Frank’s diary of the Second World War.

As the diary of Anne Frank was so far translated into more than 50 languages, Bangabondhu’s    Oshomapto Atmojiboni has been translated into English, Urdu, Assamese, Arabic, Italian and many more languages.

The answer to the query why these memoirs were published as autobiography after so many years was given by Sheikh Hasina. Sheikh Hasina knew that Bangabondhu wrote memoirs but she still could not trace where they were. They were not in their Dhanmondi house. At last these four note books came under her custody in 2004 after a brutal attack on her and others at the Awami League rally on 21st August at Bangabondhu Avenue.  Sheikh Hasina’s cousin handed them over to her. They were found coincidentally in the table drawer of the office room of another cousin Late Sheikh Fazlul Hoque Moni, the then editor of the newspaper Banglar Bani. Bangabondhu might have given these notebooks to Moni for typing   during any time between 1972 and August 1975 so that they might be published as autobiography. But, it could not be accomplished because Moni was also killed in August 1975 along with Bangabondhu. Sheikh Hasina and Sheikh Rehena were surprised as well as overwhelmed with joy to find these notebooks. The leaves of these notebooks were so ragged and delicate that it was difficult to turn them over and they might be torn any time.

This autobiography covered the life of Bangabondhu till 1954. He mentioned that he wrote this memoirs in his captivity during 1966-69. Bangabandhu did not dedicate this book to anybody. Bangabandhu’s friends, well wishers requested him to write an autobiography. He replied humbly that he did not do any great things for the country that they need to be written down. However, he agreed to do it at last after Fazilatunnesa left some notebooks for him at the jail gate to write down the memoirs. In the first few pages Bangabandhu narrated his ancestral history.

These memoirs are about the way he grew up from his boyhood, his family lineage, his movements as a student organiser and leader, and most importantly, his struggle to establish the rights of the people. The Father of the Nation narrated his feelings, sentiments in a simple lucid language without any bias. This autobiography narrates the twists and turns of history of the last decade of the undivided India, eight years of the Pakistan regime and the struggle of the people against the oppressive Pakistani regime.

Shiekh Mujibur Rahman comes of the Sheikh lineage, an aristocratic family of Gopalgonj. This lineage was established by Sheikh Borhan Uddin. The four buildings where Mujib and his ancestors lived date back to more than two hundred years. Mujib inherited the title Sheikh from both of his parents’ side. His paternal grandfather was Sheikh Abdul Hamid and maternal grandfather was Sheikh Abdul Majid. It is interesting that his marriage with Renu, the nickname of Fazilatunnesa was registered when he was 12/13 years old and Renu was only 3.  Mujib says that he developed his knack for reading from his boyhood. His father subscribed to   a number of newspapers, such as, the Anandabazar, Azad, monthly Mohammadi and Swogat.

Mujib also narrates how he organised political programs under the supervision of Hossain Shahid Sohrawardy, how he organised Muslim Chattra League, his days in Islamia College at Calcutta. As a good soul he did not hesitate to acknowledge the positive sides of a leader holding different opinions. Bangabandhu narrated how he along with Fazlul  Qader  Chowdhury of Chittagong protested against the tyrannical attitude of Mr. Waseq, the president of  All Bengal  Muslim Chattra League for the latter’s  holding the post of president illegally. This happened in 1945 or 46. But, Mujib wrote about this event while writing the memoirs during 1966-69 when Mujjb was already fed up with F Q Chowdhury for his anti-Bangali attitude and activities.

He also narrated how he organised relief operation during the famine of 1943. Mujib must be appreciated for his sharp memory and apt skill in narrating anything in detail but with a non-partisan stand as an expert historian. He gave a true account of all political leaders of his time and their activities. He could remember and narrate the activities of all of his contemporary leaders living even in the district levels. He narrated about the activities of two prominent leaders of Chittagong Awami League, MA Aziz and Jahur Ahmed Chowdhury, among others.

Mujib showed his feeling of respect for his political mentor Suhrawardy mentioning another incident of kindness. It relates to how Suhrawardy paid his hotel bills, bought air ticket for him up to Delhi, gave some pocket money and arranged for his trip to the airport by giving a companion etc. when he met Suhrawardy at Lahore in the independent Pakistan for the last time. Mujib says that his heart was broken while taking leave from Suhrawardy at Lahore. He reminisces the pitiable condition of his mentor Suhrawardy in the following words, “He is financially  so much insolvent that  he cannot manage food unless he runs cases, how helpless he has become, his colleagues who were once proud of him have now become his enemies”(p.144).   Bangabandhu also assured Suhrawardy saying, “We will form political party in the East Bengal and Muslim League will have no place here if you join with us. The nation will again get benefit from your strong leadership and organising skill” (P.144). There is also a short reference to another great leader of the Bangalee Muslims of the undivided India, Sher-e- Bangla A. K. Fazlul Hoque. Mujib mentions about his meeting Fazlul Hoque several times as a young student leader. He is eloquent in expressing his admiration and respect for the veteran leader, Sher-e- Bangla.

While working to realise the rights of the Bangalees, he passed almost one-fourth of his life-time in prison. While once reminiscing about his imprisoned life in Dhaka jail in 1950, he says that his responsibility was to weave yarn. He says he enjoyed doing it because he got tired of sitting idle. He also narrates his tour to China as a delegate of Pakistan team at the Congress of the Communist Party of China. Mujib also narrated about his role in the Language Movement of 1952.

This autobiography tells about his life from birth till 1954. That is why, this autobiography is called Oshomapto Atmojiboni.  The remaining 20 years or so of his life were not less illustrious than the ones narrated in the autobiography. The dexterity with which Mujib narrated everything in great detail was unique. The book is worth reading by readers of any age and any level of literacy. The language is lucid, the description is convincing and details are explanatory at their highest.  The book was published by University Press Limited. The price is only 220 Tk.