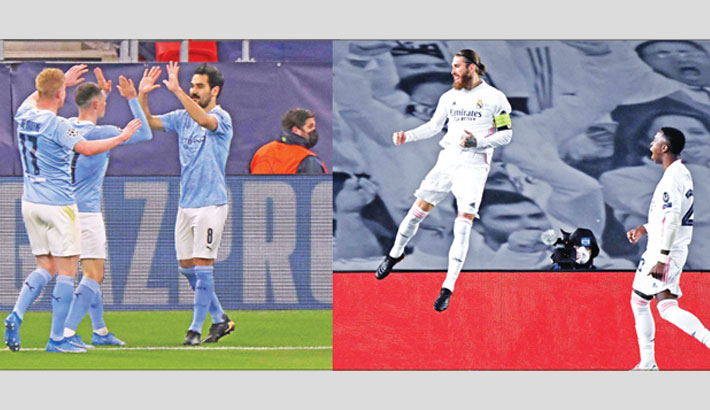 Manchester City players (left) celebrate a goal against Borussia Monchengladbach in Budapest while Real Madrid defender Sergio Ramos celebrates his goal during the UEFA Champions League round of 16 second leg match against Atalanta in Madrid on Tuesday. — AFP photos

Real Madrid avoided another early Champions League exit on Tuesday by beating Atalanta 3-1 to win the tie 4-1 on aggregate and reach the quarter-finals for the first time in three years.

Sergio Ramos marked his return from injury by converting a penalty after Karim Benzema continued his scoring streak by capitalising on a glaring error from Atlanta goalkeeper Marco Sportiello.

Sportiello's scuffed clearance in the first half resulted in Benzema being given an easy finish at the Alfredo di Stefano stadium and after an electric start, Atalanta never really recovered.

Luis Muriel pulled one back for the visitors late on but any hopes of a comeback were quickly dashed as substitute Marco Asensio fired in a third for Madrid.

Zinedine Zidane's side will be in Friday's draw for the last eight and with their old guard fit and firing again, they will be hopeful of exceeding what are now dampened expectations of La Liga's reigning champions.

"We showed tonight how much hunger there still is in this team," said Luka Modric. "We can go far. How far let's see but today was an important step."

Pep Guardiola told his Manchester City players to forget their previous Champions League failures after cruising into the quarter-finals with a 2-0 win over Borussia Moenchengladbach on Tuesday that sealed a 4-0 aggregate victory.

The Champions League is the one trophy that has remained elusive to Guardiola during his five years in Manchester with City failing to ever get beyond the last eight under the Catalan.

But the runaway Premier League leaders will get the chance to break that barrier next month as they showed why they are the bookies' favourites for the competition with another classy performance in Budapest, which hosted both legs of the tie due to coronavirus restrictions on travel between England and Germany.

Early goals from Kevin De Bruyne and Ilkay Gundogan killed off any hope of a fightback from the Germans as City recorded a 24th win in their last 25 games in all competitions.

"What happened in the past is the past," said Guardiola, who won the Champions League twice as coach of Barcelona but has been unable to replicate that success with Bayern Munich or City.

"In the quarter-finals one bad game, (a few) bad minutes can punish you.

"Now it is the best teams in Europe. The quality every time is higher and hopefully we can maintain this mood."