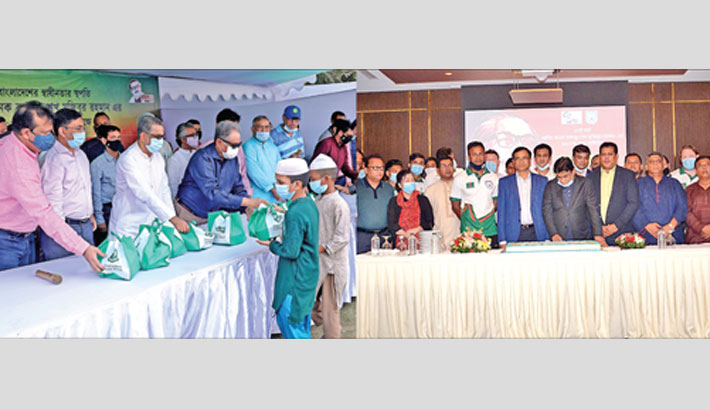 Bangladesh Cricket Board President Nazmul Hassan Papon (left) distributes foods among the underprivileged children at BCB Academy ground in the capital while Bangladesh Football Federation President Kazi Salahuddin cuts a cake along with Bangladesh national team footballers at a city hotel in the capital on Wednesday. Bangladesh sports fraternity celebrates the 101st birth anniversary of the greatest Bengali of all time Bangabandhu Sheikh Mujibur Rahman on Wednesday. — Collected photos

The country’s sports fraternity celebrated the 101st birth anniversary of Father of the Nation Bangabandhu Sheikh Mujibur Rahman on Wednesday.

The day got a different colour due to the Mujib Barsho, which was extended nine months till December 16 this year.

Bangladesh Cricket Board celebrated the day, which is also the National Children’s Day, in a befitting manner at the Sher-e-Bangla National Stadium. BCB arranged special prayers and distributed food among the poor.

Earlier, BCB postponed the two proposed matches for the COVID-19 outbreak last year. The games were scheduled to be played on March 21 and 22 last year while an AR Rahman concert was due to take place on March 18 last year.

“As the celebration time is extended till December we are seeing some possibility whether we can arrange that match or not but at the same time we have to remember the Covid-19 situation is not good,” said Nazmul.

Describing the great role of Bangabandhu in making Bangladesh, Salahuddin said, “Today is Bangabandhu’s birthday. We have got an independent country because of him. We took part in the liberation war after hearing his order.

“Today (Wednesday) we are talking here and celebrating the day, in an independent country, because of him and his leadership.

“I'm lucky that I know him, I got chances to eat with him several times. I know his family, his daughter Prime Minister Sheikh Hasina since then. I'm also lucky that today I'm celebrating the day as BFF president with footballers.

“He was a sportsman. His son and other family members were also sportsmen. Sports were in their blood,” he added.

National footballers, who were in the residential camp for the Nepal tour, also celebrated the day with a cake-cutting program at the Hotel InterContinental.

Taekwondo Federation took initiative to arrange a 10-day program including Mujib Barsho Independence Day Competition from March 17 to 26 to mark the day while the Chess Federation arranged Bangabandhu International Rating Chess Competition. Other sports federations also celebrate the day in their befitting manner.