Tribute to the Architect Of Independent Bangladesh 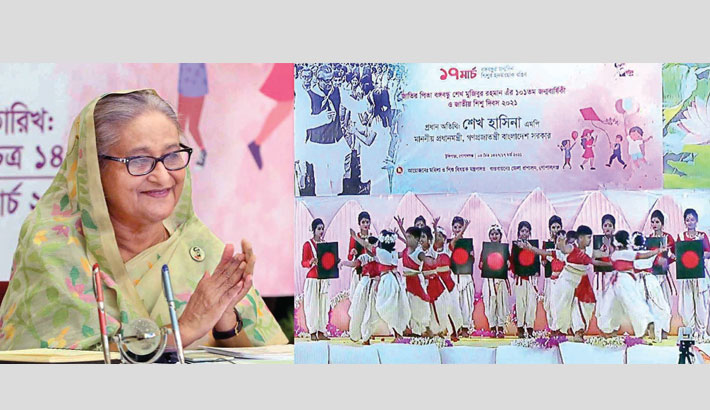 Prime Minister Sheikh Hasina on Wednesday said the government is doing everything possible for ensuring a better future for the children of the country, reports UNB.

“We want to make the lives of children more colourful, beautiful, successful and fruitful. This is our aim,” she said.

The Prime Minister said this while addressing a Children's Rally and Cultural Programme marking the birth anniversary of Father of the Nation Bangabandhu Sheikh Mujibur Rahman and National Children's Day on Bangabandhu Mausoleum Complex premises at Tungipara, Gopalganj.

“We’ve become a developing country, we won’t just stop here. Bangladesh should move forward further. Now our aim is to make Bangladesh a developed and prosperous country by 2041,” she said.

Sheikh Hasina said the government is taking all the necessary steps and formulating all the policies to make Bangladesh a developed country by 2041.

“Those who will come to power in the future will follow the policies and continue the trend of development. That’s what we want,” she said.

The Prime Minister briefly mentioned the steps taken by her government for the children during its different tenures.

She urged guardians, teachers, eminent personalities, religious leaders, public representatives and others to remain alert so that the children do not fall prey to any destructive behaviour.

“We’ve to protect the children from the clutches of militancy, terrorism and drugs. We want the lives of our children to be beautiful,” she said.

Hasina said the government has amended the Women and Children Repression Prevention law to ensure tougher punishment for offenders.

Talking about the miserable days of children without schools during the pandemic, the Prime Minister said the pandemic will fade away and the schools will be reopened then.

She urged the children to continue their studies staying at home alongside continuing their cultural activities. “Sports and cultural activities are urgently needed.” She also asked them to maintain discipline and abide by the instructions of guardians and teachers.

Highlighting various measures taken by Father of the Nation Bangabandhu Sheikh Mujibur Rahman for the welfare of children, Hasina said Bangabandhu had made the primary education free for students and the secondary education for girls.

With a view to protecting the rights of children, Bangabandhu enacted the Children Law in 1974, the Prime Minister added.

She said her government formulated the National Children Policy in 2011 and it has taken measures to protect the children’s rights and remains careful so that children can get the scope of education, sports, physical and cultural exercises.