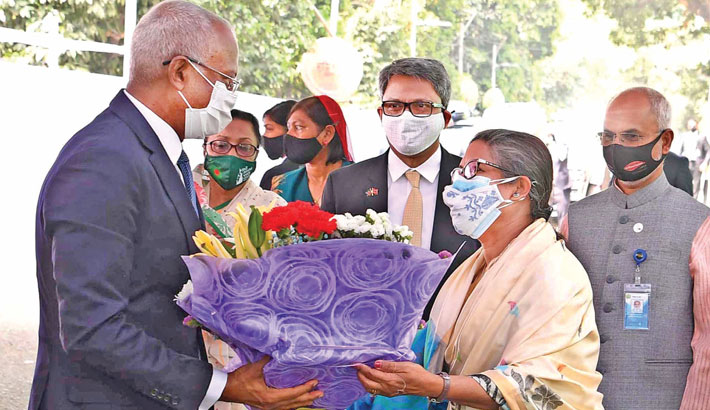 President Solih attended a wreath-laying ceremony at the National Martyrs’ Memorial to commemorate the heroism and patriotism of those who sacrificed their lives to win Bangladesh’s independence. He also signed the visitor’s book and planted a sapling at the site.

Honouring all those who sacrificed their lives during the Bangladesh Liberation War of 1971, which delivered independence for the nation, the memorial serves as a symbol of Bangladesh’s independence won through great sacrifice.

President Solih then went to visit the Bangabandhu Memorial Museum and toured the museum grounds, according to President’s Office of Maldives.

Bangabandhu Memorial Museum was the home of Bangabandhu Sheikh Mujibur Rahman, later converted into the museum. The establishment is a monument celebrating his lifetime of accomplishments and struggles.

Bangabandhu Sheikh Mujibur Rahman laid the groundwork for Bangladesh to attain independence and is remembered fondly as an icon of democracy and self-determination.

Later in the evening, President Solih attended a programme marking the birth centenary of Bangabandhu Sheik Mujibur Rahman as the guest of honour.